Putting a freeze on energy waste in ice arenas

Sustainable Design and Operations for Ice Rinks
Back to Journal

By their very nature, ice arenas are energy consumers, often due to the competing interests of intense refrigeration and heating for occupant comfort. Owners want an efficient building envelope, rink managers want lower operational costs, participants want ice at the proper temperature for their respective sports, and spectators want to be able to watch without shivering in their seats.

The good news is, sustainability and ice arenas do not have to be mutually exclusive. In fact, there are now a variety of tools and options to meet everyone’s needs. Because of their nature and use, ice facilities’ sustainability efforts tend to focus heavily on energy reduction as the primary facet of control. While it is true that ice arenas are energy hogs, that does not mean that sustainable practices cannot be utilized in their design and operation.

When planning a new facility, several relatively simple strategies can be employed to maximize sustainability. These include solar orientation of the building, ultra-efficient building envelope construction, partial earth sheltering, and a reduction in overall building footprint. However, operational energy savings undoubtedly has the greatest impact on sustainability for arenas.

A 2009 survey of Quebec ice arenas showed the least efficient community rinks used upwards of 2.4 million kWh per year, while the most efficient rinks used vastly less energy at around 800,000 kWh per year. By using just some of the energy-saving methods with relatively low payback periods, operators can expect energy savings in the range of 40 percent.

Resurfacing and refrigeration
Beginning with the ice surface itself, designers have many ways to ensure the stage is set for maximizing operational savings.

Let’s assume that the rink floor in question is a poured-concrete slab, though operators of sand floor facilities can generally apply the same principles with a few exceptions and achieve similar results. The flatter the floor, the easier it is for operators to maintain an optimally thin ice surface. An ultra-flat floor can result in as much as a 6 to 8 percent reduction in compressor energy use. Similarly, if the density of a concrete slab is increased, it can transfer temperature much more efficiently, adding to the percentage of energy savings in compressor operations. If rink operators carefully monitor ice thickness and perform necessary ice maintenance, they will keep the ice surface as thin as possible and keep costs down.

Today’s ice systems designers have many options to choose from, and the design of an ice plant involves several combinations of compressor types and controls systems intended to streamline operations. These systems can minimize run times, quickly achieve needed changes in ice temperatures, and even be self-diagnostic.

Optimizing compressors is a science in and of itself, with factors such as compressor sequencing (phasing), floating head pressure, variable-flow or dual-drive brine pumps, variable-frequency drives on evaporators, high-efficiency motors, and soft-start controllers. It would not be unusual to see as much as a 3 percent bump in operational savings through the optimization of compressors. Some manufacturers have even developed proprietary systems that are continually seeking to exceed these savings.

In addition to using energy that might otherwise be wasted, savings from compressor design and sizing are becoming more common. If careful consideration is taken during system design, and facility operators can maintain predicted loads, compressor sizing may be reduced. For instance, if a single ice sheet requires 40 tons of cooling, that same ice slab might be combined with one or more other ice sheets and reduce the individual cooling load to a more efficient 25 tons. This is a 60 percent reduction in needed compressor capacity. However, if unintended loads are applied by either excessive rink use or by underutilizing the facility, the compressors will not operate at full efficiency, which can result in higher operating costs, overworked equipment, shorter compressor lifespans, and even failure.

Building envelope and materials
Due to the immense amount of humidity that can be produced within an ice arena, any opportunity to use airtight insulation in the walls and roof of the main arena volume should be taken. Batt fiberglass insulation will eventually collect water vapor and sag, lose its effectiveness, or worse — grow mold. A great solution are insulated sandwich panels, which feature a closed-cell middle insulation layer held between the inner and outer finish surface of a metal panel — usually galvanized steel or aluminum.

While these panels do use expanded closed-cell insulation, they provide such a thermally secure building shell that they more than make up for it over the lifespan of the building. By designing an ultra-airtight building envelope, rink designers can significantly reduce the total tonnage of refrigeration needed to cool the ice.

Low-emissivity ceilings are a very effective tool for reducing the heating load on the ice surface — and consequently, the refrigeration systems. The “emissivity” refers to any material’s natural tendency to reflect (or “emit”) radiant energy, which travels through the air without affecting the air temperature itself, but strikes and warms surfaces. Since radiant heat flows from warmer objects to cooler objects, this means small amounts of energy are constantly transfered from ceiling to ice.

Therefore, if the ceiling structure and decking of a metal ice arena have standard paint coatings, their emissivity means that they give off radiant energy and direct it toward the ice, heating the ice surface and making the refrigeration system work a little harder. Low-e materials simply have a far lower emissivity than standard materials (like metal arena ceilings), which means less energy transferred from ceiling to ice — reducing the heat load on the ice by as much as 30 percent.

Low-e ceilings are typically white or shiny/reflective, and a common misconception is that a shiny surface “reflects” heat. In fact, it doesn’t collect and therefore doesn’t emit as much energy. The shiny part is simply a bonus, because the high degree of visual reflectivity makes light sources appear much brighter, usually allowing a reduction in the number of light fixtures over the ice surface, which in turn reduces heat load on the ice and electrical load on the facility.

Lighting
Older rinks utilized individual high-pressure sodium or metal halide lights spaced evenly across the rink surface to provide intense spots of light. These are heavy energy users and bulb replacement is quite expensive, and in order to avoid empty spots on the ice surface, more fixtures are used than are necessary for light levels.

LED fixtures are getting more affordable, and provide even greater operational cost savings than fluorescent. If they can fit within initial or retrofit budgets for new construction, LEDs are a great option, and they are often eligible for considerable rebates from utility providers and/or government agencies.

Elsewhere in the facility, lighting changes can greatly help with energy savings. Occupancy sensors in common areas, restrooms, offices and locker rooms can help conserve a significant amount of electricity usage. Reducing lighting levels and/or fixtures in spectator areas can cut costs, as can setting lighting in these areas on separate zones and schedules. There is no need for lighting over seating when nobody is sitting there.

Dehumidification and ventilation
Dehumidification for ice rinks is necessary for a variety of reasons that go beyond removing humidity from the air itself. Besides controlling indoor fog in warmer seasons and improving indoor air quality, a dehumidification system will provide a level of building efficiency.

High humidity within the arena volume can lead to humid air condensing on the ice surface, which increases the ice thickness over time. Thicker ice means a harder-working ice plant. Additionally, humid air can cause newly resurfaced ice to freeze more slowly. Ultimately, dehumidification of indoor air will result in lower energy usage.

If the only reason for dehumidification were ice-related issues, the equipment and its operating cost might not be worth it. Fortunately, dehumidification has other primary benefits in an ice arena. It also helps prevent moisture vapor from damaging steel building structure, equipment and non-moisture-resistive building materials, and from permeating fiberglass batt insulation. The lower the odds for mold growth within the rink, the better it is for air quality and occupant health.

It is important to note that this article separates arena HVAC as being for spectator comfort, with the understanding that where combustion ice resurfacers are used, some ventilation is required to meet clean air standards. Modern building code and energy requirements have changed design thinking. Not only are air exchanges within the box necessary, spectators demand some form of comfort control or heating at least over the seating areas. The advent of waste heat capture usually provides the necessary heating for locker rooms and the other rink-related support spaces, as well as for heated water.

A centralized HVAC system is typical for other occupied spaces such as lobbies, restrooms, pro shops, concessions areas and viewing rooms. Cooling capacities for these spaces are not uncommon for summer usage, and certainly for arenas in southern areas of the country.

Ways to incorporate sustainable practices as they apply to occupant comfort include:

• Radiant heating for spectator areas is much more effective at keeping spectators comfortable because it doesn’t heat the air but rather the spectators below it. That said, radiant heat only heats objects in its direct radiant zone, which means other areas of the arena are going to feel much colder. Therefore, spectators moving between heated seating areas and other spaces within the arena bowl are not going to experience a consistent comfort level, and it is not as effective in larger-spectator-capacity situations.

• Forced air in the arena bowl may not be the best choice in smaller arenas, as it is highly inefficient for spectator areas within the large-volume arena space. The cool, humid air within the box draws a large amount of heat from the forced air as it leaves the duct system and travels to the spectators.

Introducing forced heated air into the rink volume increases how hard other building systems must work. For instance, the warmer air can mix with cooler air and cause moisture vapor, which the building’s dehumidification must then work harder to remove. Ambient air temperatures increasing within the arena will also naturally create more work by the refrigeration system to keep ice at the correct temperatures.

Green thinking equals great ice
These are only a handful of sustainable options that can be applied to ice rinks, and not every rink can harness all sustainable design strategies. However, if rink owners and operators understand the options available, they may be able to apply them no matter what stage of arena operation they’re in. Whether planning a new facility, expanding an existing one, retrofitting lighting, changing refrigeration, or simply implementing scheduled deferred maintenance, every step is an opportunity to implement sustainable practices.

This article originally appeared in the November|December 2017 issue of Athletic Business with the title “Putting a freeze on energy waste in ice arenas.” 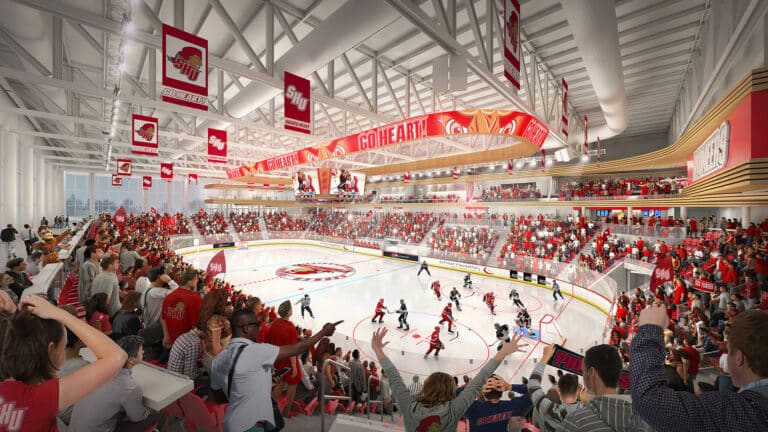 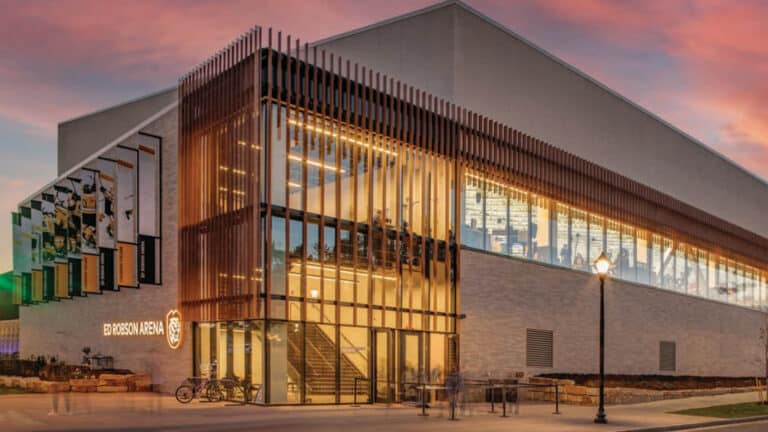 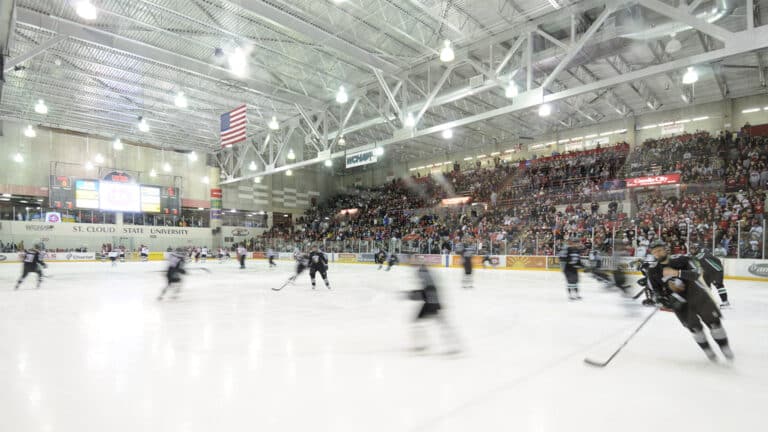 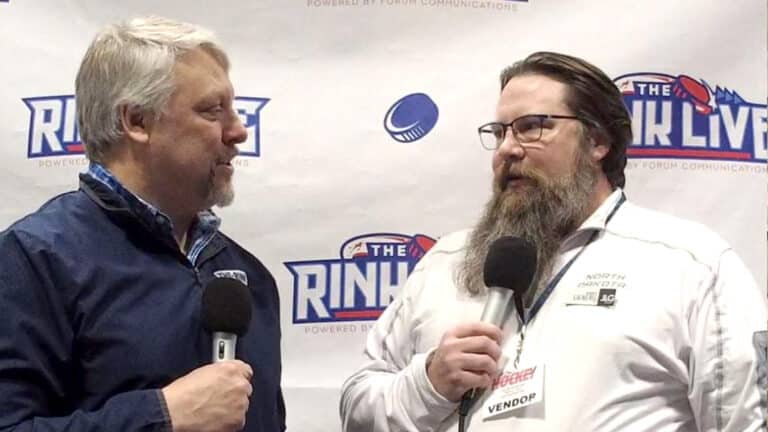