Colorado College has just unveiled its first on-campus hockey arena and sporting-event venue, Ed Robson Arena. The 135,000-square-foot project marks the first time the hockey team will be able to play games on campus since the program’s founding in 1938. As another historic first, the entire on-campus community in Colorado Springs will finally be able to gather at, and walk to, one indoor location. While the arena was originally planned as a practice venue, its future is now solidified as a multi-purpose, state-of-the-art, sustainably designed competition venue that benefits both the campus and community.

Through a national design competition, Colorado College chose JLG Architects to navigate the venue’s $52-million comprehensive design. Leading the team was Randy Lieberg, Senior Ice Planner at JLG Architects and Certified Ice Technician for the U.S. Ice Rink Association, and Mike Wekesser, Practice Studio Leader of JLG’s Sport Studio. The two worked collaboratively with the college to create the 3,400-seat facility, intended to be a model of accessibility and sustainability for students and the nation. While the prior ice arena was considered the least energy- efficient building on campus, the new arena was constructed using best building practices and materials, standing by the college’s commitment to sustainability. The building will receive roof-mounted photovoltaic panels in a future phase.

JLG’s team leveraged its extensive ice-hockey experience to create three individual floor plates. The main event level houses the entry lobby, major service, locker rooms, and training spaces. Above that are an elevated main concourse and a primary public concourse, with a 360-degree circulation path around the seating bowl. The seats cascade from a circulation path to the ice rink, giving fans a constant, uninterrupted view of the action on the ice. The uppermost level is an elevated club deck, featuring a private and premium open concourse that houses two open-club lounges with individual seating sections, including two private suites and a center-ice media and production suite.

The arena’s overall concept is focused on big-picture campus goals—creating an iconic campus event space and sports centerpiece the entire community and campus can enjoy. To complete this vision, JLG organized the floorplan into an optimized hockey and event environment, with a four-sided, center-hung scoreboard and seating circling the entire bowl. The seating decks are steep and intimate, allowing fans to be close to the ice, right on top of the action, and loud and proud, creating the ultimate home-ice advantage for the Colorado Tigers.

With views overlooking campus and Pikes Peak, it was important that the campus capture the connection to the outdoors, even in the main seating bowl; here, fans can catch a glimpse of both views through a ribbon of strategically placed windows, adding depth to the more intimate space. Outside the seating bowl and the fan experience, the arena has been perfectly tailored to support student athletes. To achieve a higher level of customization, the design team mapped out interaction and player paths, carefully considering daily and gameday activities of staff, administration, media, and even recruits.

As a result of collaborative planning, the college now boasts an arena that’s unique in size and scope, easy to manage and maintain, and optimized for high-level athletic competition—thanks to its comprehensive sports-medicine facility, in-house TV production, and flexible floor space. Inside, spacious locker rooms are designed to create a fully branded experience introduced by the college logo illuminating the core. Nearby, the players’ lounge is equipped with PlayStations, TVs, and a sound system adjacent to a 2,000-square-foot weight room. The training spaces are also dressed to impress with hydrotherapy tubs and a private video room with theater-style seating, a quiet space for teams and coaches to engage in one-on-one work sessions.

In addition to the varsity hockey team, the new arena is ready to host intramural and club-hockey programs, figure skating, and community hockey leagues. Beyond the rink, the building has leaned into its big-picture goals, setting aside space for student-life activities and academics, while the community benefits through public skating with rentals, lockers, and secure storage. Taking the multi-purpose design one step further, the hockey arena easily transforms its 3,400 seats into a 4,600-seat venue with center stage and concert configurations.

With its location on the southeast side of campus, the arena provides boundless opportunities for commercial use. Guests will find a campus-inspired streetscape with buildings flowing in and out along Tejon Street’s edge, offering a dedicated Tigers team store, a café, a bookstore, retail outlets, campus security, and arena ticket operations. As another contribution to community and campus, the site has an art studio, a health center, a mail room, and a gathering spot for students, athletes, and fans. To support these amenities, the arena offers an attached four-level parking ramp for students during the academic day, as well as for fans and concertgoers during events.

Colorado College now can close Tejon Street to vehicular traffic on event nights, creating an active, extended plaza for patrons to gather pre- and post-game. This area is adjacent to the base of a glass entry lobby that houses a grand stair that rises from the street and allows fans direct access to the main concourse and the activity on the ice.

From collaborative discussions, design iterations, and concept studies, the arena has become a good neighbor, fitting in well with Colorado Springs in both scale and context. One of the features that helped the community and campus transition was a more extroverted and transparent building design, unlike traditionally closed-off hockey arenas. To do this, the team executed a design that allows for views in and views out, horizontally wrapping the façade with a ribbon of glass. The glazed-glass opening allows fans to view the community, and the community to observe the action inside.

To blend in with the existing campus architecture, the façade also emulates a mid-century modern design, making the arena an impressive gateway building to the campus. Even the profile of the arena emulates the mountain surroundings, using a sophisticated wedge shape that rises from the ground to create a silhouette familiar to the landscape.

The Ed Robson Arena is part of the state-run economic program, City for Champions Project, intended to spur and support large-scale tourism projects. In return for state and local TIF financial support, the facility is required to host a specific number of public events throughout the year, which the arena is now fully equipped to do. The new arena was made possible via the city’s investment through this program, as well as commitments from a number of donors, including an $8-million donation from former alumnus and hockey player, Edward J. Robson, class of 1954.

Robson received an honorary degree from the college in 2014 and credits the college’s hockey coach Cheddy Thompson for the program’s success. Thompson guided the team to the program’s first NCAA championship in 1950, and the team went 149-72-6, with six NCAA bids during his 10-year career as coach. Robson’s generous donation allowed the college to envision a more expansive design to benefit both the college and the community.

Today, and into the future, Ed Robson Arena will provide a wealth of opportunities, not only for Colorado College but also for the Colorado Springs community and the larger Pikes Peak region. The venue is primed for hosting regional, national, and international events in partnership with the USOC and related governing bodies, further strengthening the city’s vision to become America’s Olympic City.

Randy Lieberg, AIA, CIRM, is Senior Ice Planner at JLG’s Sport Studio. He is the only practicing architect in the country to have earned the designation of Certified Ice Technician and Certified Ice Rink Manager through the U.S. Ice Rink Association. His role within JLG Sports Studio is to provide a technical and instinctive comprehension of how team spaces work, how the facility serves its users, and how operators interact with facility function and floorplan. 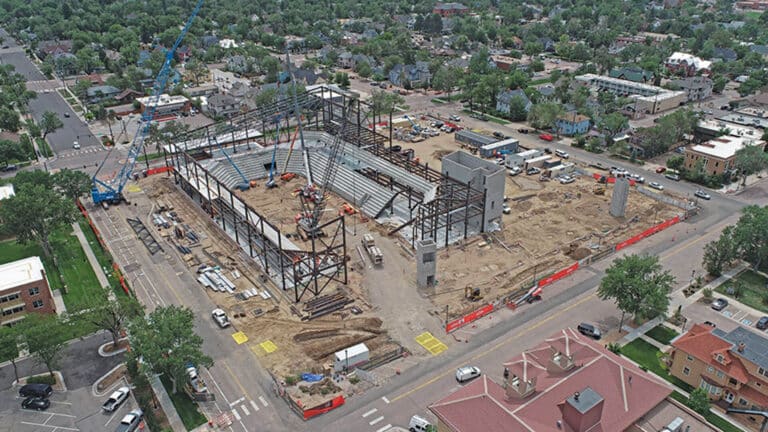