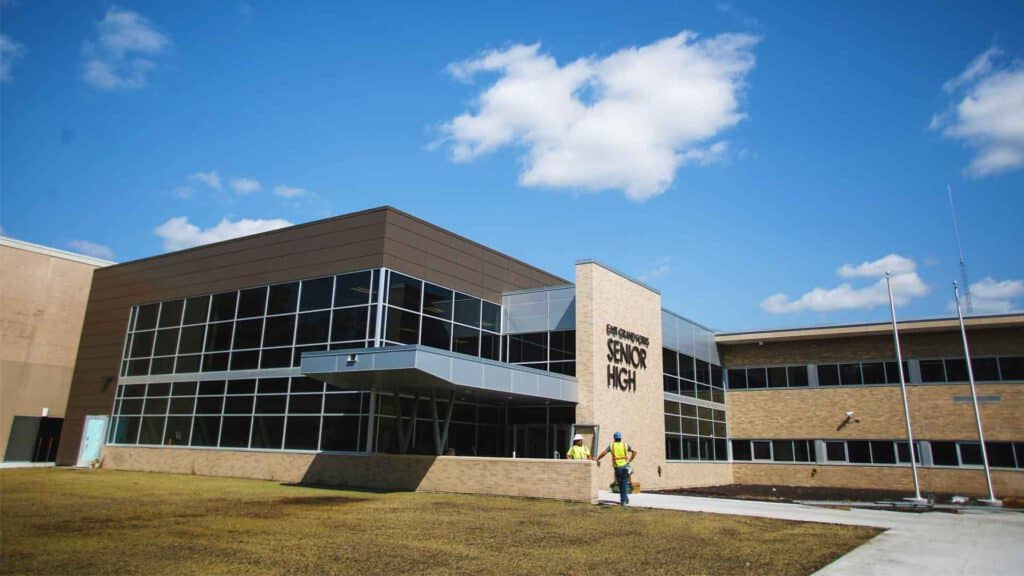 After nearly 16 months of construction, the $20.6 million building and renovation project at East Grand Forks Senior High School is nearing completion—and will be done in time for the first day of school, Sept. 5, Principal Brian Loer said.

Amid the noise, dust, equipment and multitude of boxes, about 150 workers in hard hats were busy late last week working in the 70,000-square-foot addition and the rest of the school.

“They’ve really been pushing,” said Loer, while pointing out features—finished and planned—of the project that was approved by about 56 percent of voters in a bond issue referendum in November 2015.

The new space also includes a lab for science, technology, engineering and math—or STEM—education and an administrative wing with offices for the principal and superintendent and a conference room.

Renovation has affected, to some degree, every part in the school.

“Every room, for the most part, got a little bit of something—whether it was a new door, or electrical outlets, new paint, a new locking system for their door, something,” Loer said. “Some got a lot more than others.”

Space in building additions that were constructed in 1990 and 1995 didn’t need a lot of work because they are fairly new, he said.

“We renovated every bathroom, every science lab and our existing locker rooms, and moved and renovated our FACS, Family and Consumer Sciences, room.”

Just inside the north entrance to the addition, which houses the gym, is a large commons area where two large video screens will be installed to promote upcoming events, Loer said. Using interactive technology, anyone can view such things as historic photos or past yearbooks.

Nearby are rooms designated as a concessions stand and a “pep shop” where students and fans will purchase school-themed apparel.

Inside the gym, a second-story running and walking track, which encircles the perimeter, will be available for public use during after-school hours, Loer said.

The gym can be divided into two regulation-size basketball courts, allowing for two games to be played at once. Two scoreboards are situated on each side of the gym.

The first athletic contest to take place in the gym, a girls’ volleyball match with Kittson County Central, is set for Sept. 7.

Loer emphasized that the project was meant to improve all aspects of the high school experience, not just athletics—and that’s how it was sold to voters.

“We built it for athletics, for academics, for the arts, for everything,” he said.

The art rooms—equipped with sinks, cupboards and a kiln—are flooded with natural light from tall windows.

The band and choir rooms were relocated to space that is much closer to the Performing Arts Center. The band room has an exterior door which gives musicians easy access to the football field. The choir room is wired with a new sound system, speakers and a drinking fountain.

A music common area, where students can lounge in their free time, is painted bright orange and furnished with high-top tables, lending a kind of collegiate vibe to the space.

Project planning began in fall 2014, and the project was launched in mid-May 2016 with ground-breaking for the football field, Loer said. That phase was completed in time for the launch of the football season last fall.

Construction of the new addition “has been ongoing the whole last school year,” Loer said.

Then, this past spring, “on May 22, (workers) came in here like gangbusters.”

Green Wave students will be the big winners when the project is completed, he said.

“With all the new spaces, students will have a lot more opportunities and better equipment to work with, better facilities to work in,” Loer said.

New and renovated facilities have been designed with collaboration in mind.

“We’re getting the most updated wireless access points, just more technology in rooms, and more spaces for kids to be able to work together and cooperate,” he said.

About 80 subcontractors and suppliers—many of them local—have been involved in the project, said Bill Blair, project manager with Construction Engineers of Grand Forks, the general contractor.

Blair is confident that the work will be done before school starts, he said. “We’ll have it done for the kids.”

Any final touch-up and minor tasks that need to be done after classes begin will be done evenings, Loer said. “They’ll work around us.”

“The public is going to be very happy” with the results, he said.

An open house will be planned and announced by Construction Engineers, probably in late September. 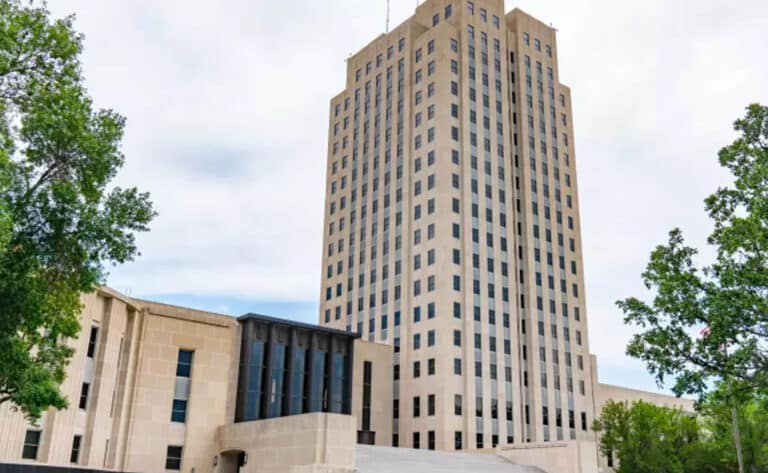