NDSU gets OK to build addition to Sudro Hall

North Dakota State University has the OK to build an addition to Sudro Hall with a price tag up to $28 million to allow for the expansion of its much-in-demand nursing program.

The State Board of Education voted unanimously Wednesday, March 28, to grant NDSU permission to go ahead with the project, which will be entirely paid for by private donations. So far, $22 million has been raised, but the building can be trimmed if fundraising falls short of the goal.

As planned, the six-story, 74,000-square-foot addition will connect to Sudro Hall’s northeast corner, south of Residence Dining Center. Originally, when the project was announced a year ago, the addition was envisioned as a 93,000-square-foot expansion. At that time, $20 million had been raised.

The addition will include extra instructional labs and collaborative learning spaces, which administrators say will help to avoid accreditation concerns and to expand enrollment. Added teaching space will include a multi-bed nursing skills lab, simulation labs and control rooms for observation, debriefing rooms and a nurse station.

The addition also will include exam rooms and a video-conferencing room, library space and offices. The added space will allow consolidation into one building, allowing sections of the College of Health Professions to move out of leased spaces.

Enrollment in the college has grown from 650 in 1995 to more than 2,000 today, making it NDSU’s second-largest college.

The addition also will include a simulated pharmacy instructional lab, including prescription processing, medication therapy management as well as sterile and non-sterile compounding labs, telepharmacy and institutional pharmacy space.

If funding allows, the project also could involve remodeling a small area to expand research capabilities.

NDSU administrators have said the Sudro Hall addition will help to greatly expand the nursing program over time.

In other action, board members approved budget guidelines for 2018-19 that will give campus presidents the flexibility to increase salaries during the 2019 fiscal year. However, any salary increases must be offset by cuts elsewhere, under the policy. 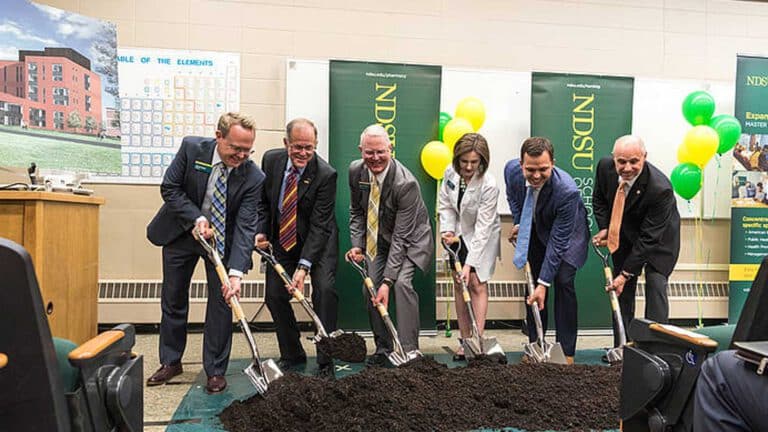