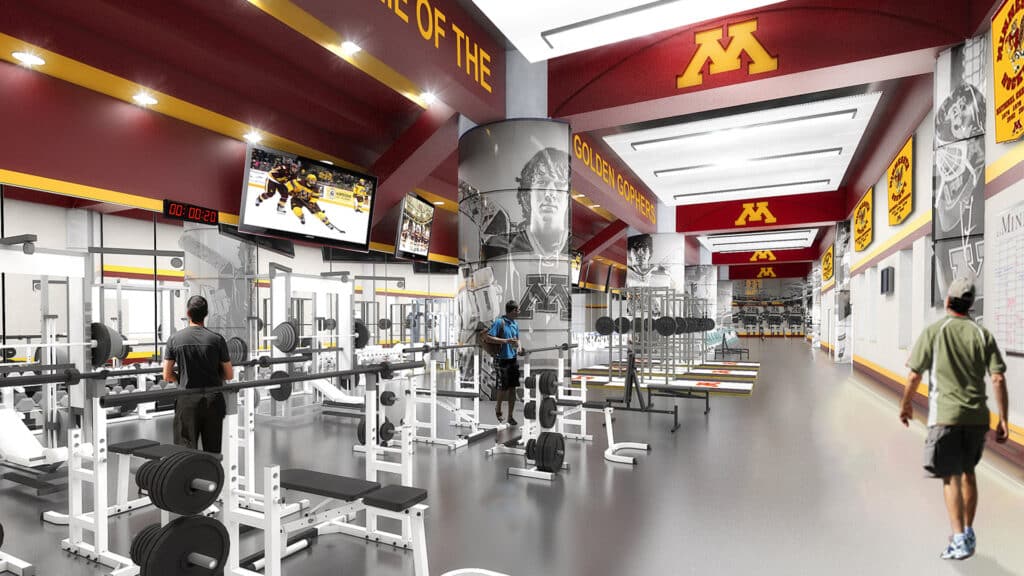 With U of M campus shut down, renovation of Gophers’ arena goes on as planned

For countless high school and college seniors and their families from throughout the region, the coronavirus pandemic means they will not be attending a graduation ceremony this spring. For the manager of 3M Arena at Mariucci, the wide-spread cancellations mean Craig Flor will miss out on two dozen of them.

The Minnesota Gophers’ home rink is also one of the most popular graduation ceremony venues in the state. The 10,000-seat facility was scheduled to host commencement for nine different U of M colleges, 14 high schools and the Minnesota State Patrol Trooper Training Academy between early May and mid June. All of them have been cancelled or postponed.

But with the campus eerily empty, the arena is one of the rare places where you can find a dozen or so people hard at work every weekday, completing a large-scale renovation project that began three months ago.

“It’s going great. We started in January and we really haven’t run into any bumps or lead time issues on any product,” said Flor this week. “With tradesmen being essential workers, we haven’t had any labor shortage or anything like that. Guys have been in every day taking care of business.”

When it is completed, the project, which was approved by the U of M Board of Regents last summer, will mean 11,000 square feet of renovated space, including an expanded new weight room for the players, new office space and a new “M” Club Alumni Room in the building, which opened in 1993. It is the second major remodel of the arena in the past five years. A large-scale expansion of the home locker room, sports medicine facilities and players’ lounge areas was finished in 2016.

“We’re going to have a fresh new look in our weight room, which is overdue after more than 20 years. But what has me most excited is our alumni room,” Gophers coach Bob Motzko said. “This is going to be totally dedicated to game nights and special get-togethers when alumni come back. You think of how many former Gophers live within a baseball throw of our facility, so to know that they’ll have a place to come back to and call home is really exciting.”

The arena’s ice was removed not long after the Gophers beat Notre Dame on Sunday, March 8, in the finale of a best-of-three Big Ten playoff series. When the rest of the college hockey season was cancelled due to the pandemic on March 12, and Minnesota Governor Tim Walz issued his stay at home order, they also removed the ice from the adjacent Ridder Arena. Flor said that the standard lead time to install a new ice sheet is around three days.

In the arena’s work zone, a Mortenson Construction crew of between 8-12 is on the job most days, taking precautions to stay socially distanced from each other.

“It’s not a huge crew and it’s not a huge space to work in. Mortenson has some protocols that have come from corporate, but overall people just have to be very careful if they do have to work in close proximity,” said Flor, who has worked at the arena since 1997. “But almost all the work in a small remodel project like this is individual. One person is painting a wall and nobody needs to be near them. An electrician is hanging a light fixture and nobody needs to be by them, so it’s worked out quite well, in terms of distancing.”

The walls for the new spaces are up and were being painted this week. Ceiling grids and lights were being installed this week as well. According to Flor, they expect to receive the rubber flooring for the weight room and get it installed either late next week or by the last week of April at the latest.

Motzko and his assistants have their offices on locker room level, one floor below the construction zone. But much of the plumbing for the new spaces runs near the coaches’ offices, meaning that Motzko and crew would have had to vacate if they were not already working from home.

“In the big picture, our stay at home initiative helped because we didn’t have to tell the coaches not to be here for two weeks while we totally destroy your offices,” Flor said. “Guess what, the governor and the coronavirus did that for us. So we were able to work in those spaces without displacing them, because they were already displaced.”

Currently on schedule, the final phases of the project will be moving furniture and weight equipment into the new spaces in early June. If and when student-athletes and alumni can start utilizing that space is, of course, up in the air, dependent on containment of coronavirus and corresponding orders from the governor’s office.

“It’s coming together and looking awesome,” Flor said. “If and when the student-athletes come back, we’ll be ready to go.”