Proposed building will replace current structure with a modern, updated space
Back to Journal

The building is meant to replace the existing concrete operations building, as well as an adjacent hangar that has served for flight operations for decades. The proposed building will function as a centerpiece for aerospace students and flight instructors at GFK, bringing much-needed updates to not only facilitate learning, but also make the space a more comfortable and welcoming environment that can help recruit students, faculty, and staff.

“The building being used for flight operations is basically an old maintenance building,” said Mike Pieper, associate vice president of facilities. “It was really never meant to be used the way it is now.”

For some 30 years, the current building has been the center of a program that has adapted, grown and changed. UND Aerospace attracts students from around the world, and just last year, students and flight instructors logged more than 126,000 flight hours. This saw GFK ranked as the busiest airport in the nation on 11 separate occasions, in terms of flight operations.

But while technology, aircraft and the number of students have changed and grown, the flight operations building has remained the same. Pieper said the building has been remodeled over the years to accommodate increased use by students and instructors, but no remodeling work can make the building larger; and in addition to aging, the building has issues with settling on the marginal soil on which it was built.

“They’re in desperate need, there’s no doubt about that,” Pieper said.

Robert Kraus, dean of Aerospace, said a new flight operations building will expand on John D. Odegard’s vision of the future of aviation. That vision, found in the book Flight of the Odegard by Patrick McGuire, is about how to “to train and fill the aviation world with sophisticated professionals.”

“Over the past 25 years, we have expanded upon John’s dream by developing an aviation program known around the world as the best in training, rigor and professionalism,” said Kraus. “This building will equip UND Aerospace with the space needed to create a high-tech connected ecosystem throughout our flight operations facilities and management. Our alumni will be fully prepared to step into their careers as world-class professional aviators and aerospace leaders.”

The University has received permission to fundraise for the new building. The final price tag has yet to be settled, though the project is expected to take 18 months. The goal of the campaign is to aim for a building that has been financed through donations, though administrators may explore other funding options.

Pieper said most of the pre-constructions work has been completed – the design was done by JLG Architects, and the services of McGough Construction have been secured as construction manager at risk.

As the premier collegiate aviation program in the United States, UND is anticipating the project will result in a landmark building, with a new multi-purpose hangar that will celebrate the history of UND Aviation, allow for future expansion, enhance partnership, and create a greater connection to campus.

The three-story building will have a sleek simulated-wood and metal design, and students and instructors will have a generous two-story view of the north Bravo flight ramp, which was rebuilt earlier this summer.

The Flight Operations Center will prioritize efficient workflow, technology and natural light, and will feature distinct areas for dispatch, records, instructor work areas and a flight store. The building will also provide briefing/debriefing huddle rooms, soft seating areas and an executive board room for future aviation professionals. The site design includes updates to the existing parking lot and the addition of a new parking lot, as well as upgrades to the drainage utility, with a new retention pond. 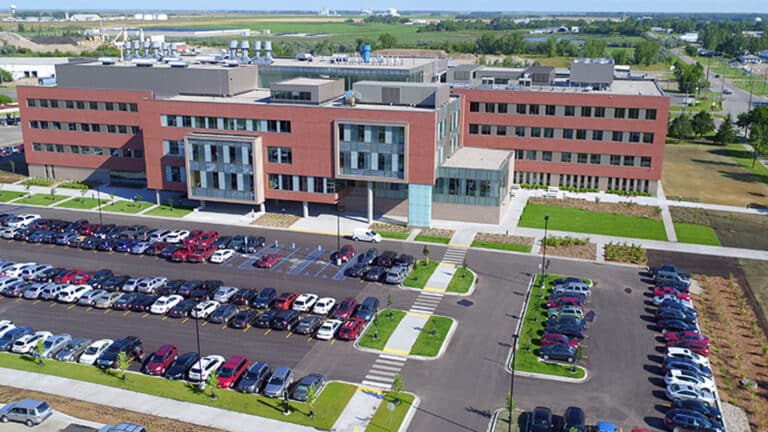