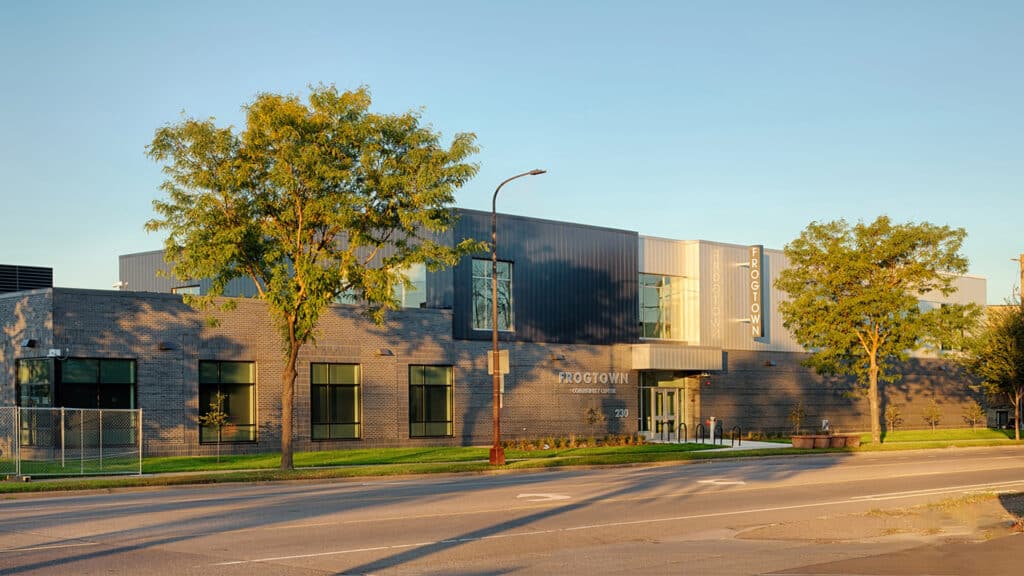 The recreation center at Como Ave. and Marion has been transformed, and people came together to celebrate with a ribbon-cutting on Tuesday, Sept. 22, 2020.

“Look what we got,” stated Caty Royce of the Frogtown Neighborhood Association as she looked around at the new building that is four times as big as the old one and has triple the fields. “It’s beautiful.”

“Invite your friends and your families to use this facility,” encouraged Ward 1 Council Member Dai Thao. “This is a place where your family can gather. We wanted to create a place where people can belong.”

“It’s yours to take care of. It’s yours to play on and enjoy and have a good time,” stated Mayor Melvin Carter, who formerly represented the city’s Ward 1.

Speakers recalled the rodents at the old 6,000-square-foot Scheffer Recreation Center built in 1973, and how they had to stand with one foot on the wall to be out of bounds while playing basketball.

“I was excited when I saw the old one coming down,” remarked Sarah Gustafson, who played basketball at Scheffer when she was a girl. She now lives across the street and appreciates the diversity of Frogtown’s residents.

“I hope it brings a lot of people here to have a safe place to congregate and play sports,” added Gustafson. Her granddaughter Ayanna Jones, age seven, cut the ribbon that day.

“I’m glad they built the park,” said Jones. Her favorite part is the hammock.

“This place will stand the test of time,” stated North End resident Greg Taylor. “I was really impressed when they built it. It’s really beautiful.”

$11 million project
The event on Sept. 22 marked the completion of phase two, which included $2.1 million in outdoor amenities. The $11.2 million project began in 2016 with community meetings at the site of the St. Paul’s first playground built back in 1909. Phase one, the new community center, opened in September 2019. Designed by JLG Architects and built by Shaw Lundquist Associates, construction began in May 2018 on the $7.7 million project. The new building faces Como Ave. while the old one was at the south end of the site along Thomas Ave.

The new 23,500-square-foot facility includes community rooms, arts space, seniors space, teen room, dance studios, kitchen, Rec Check after school space, full-size gym, fitness room, and an upper level walking track. There is a pair of private washrooms where residents can clean up for prayers, as requested by Muslim residents. And there’s a parking lot so people have some place besides the street to park. Due to the Covid-19 pandemic, it is not open for regular business hours but limited programming for registered participants is being offered. The old building was demolished in June 2019.

The terrazzo floor and wallmurals, designed in collaboration by local artists, Myc Dazzle, Megan Tate and Tou Yia Xiong, celebrates the diversity of Frogtown. After getting input from the community, the site was renamed from Scheffer to the Frogtown Community Center. The athletic fields have been named for General Vang Poa, a key U.S. ally during the Vietnam War and the leader of the Hmong resettlement efforts in St. Paul and elsewhere.

‘I love this space’ “I am blown away by this space,” said St. Paul Park and Recreation Director Mike Hahm. He recalled when new mayor Melvin Carter asked parks and recreation what the number one priority was for funding. They told him it was this center as the community had been working on the project for a very long time.

“Mayor Carter said, ‘Mike, it is my priority, too, that we fund that project.” “I love this space,” Mayor Carter told those gathered at for the ribbon-cutting. “I love this neighborhood. We’ve gotten a chance to watch this space come alive. It takes me back to when I was a kid.”

Mayor Carter said he grew up playing in the city’s rec centers, and every once in a while they’d be bussed out for a field trip at another city’s recreation centers, which were always much better.

“If Frogtown folks don’t deserve the best, I don’t know who does,” stated Mayor Carter, who pointed out that the fields were always full and it sometimes took 45 minutes to get onto the basketball court to play. “How could we as a city not respond to that kind of use with this kind of investment?” he asked. “We must provide equitable programs and amenities the communities want,” said Thao. “Park spaces are a reflection of the community, and I’m honored to have had a role in securing these new facilities in Frogtown for everyone to access and enjoy.”