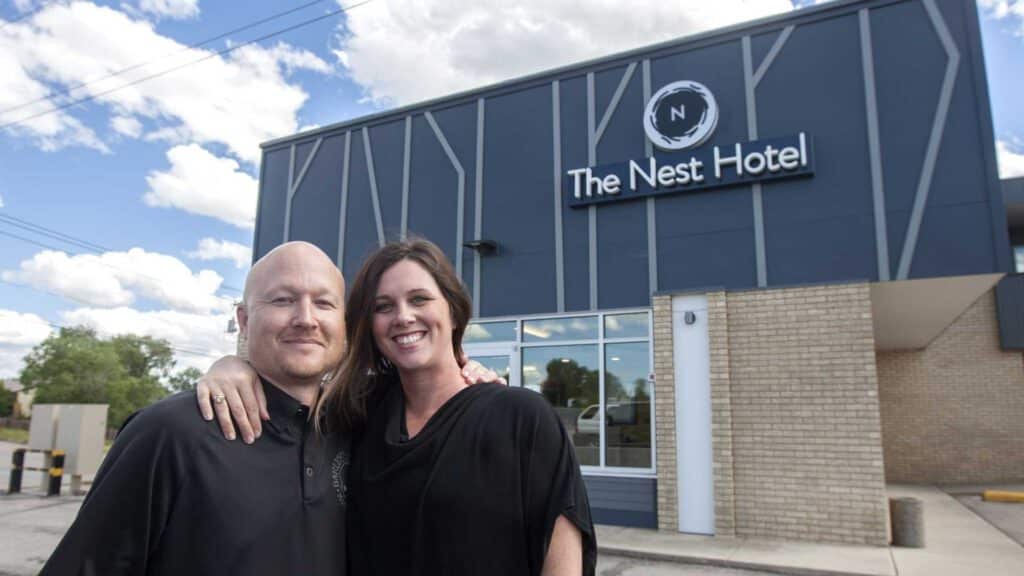 Rapid City
Back to Journal

Tom and Markie Zacharias decided to take the old Castle Inn back to its roots, and they hope Rapid City’s East North Street corridor will follow suit.

They decided to inject a monetary booster shot into the old hotel that had been in Tom’s family for 19 years, and also provide a taste of revitalization for a northeast Rapid City neighborhood that may be poised for rejuvenation.

They took the old Castle Inn, standing sentinel where Rapid City’s East Boulevard sweeps up a hill and becomes East North Street, and gave it a new identity.

The Castle Inn, like several businesses farther along East North Street, had seen better days. Now, after a complete rebuild, the hotel has given up the name suggesting a medieval fortress in favor of a new name, also implying safe lodging: The Nest.

The Zachariases might have been expected to just tear down the 41-year-old motel, a holdover from the days when East North Street was Rapid City’s motel row for tourists, providing lodging and easy accessibility from nearby Interstate 90, and just build something different.

They decided instead to transform the old hotel into a new hotel.

“We knew that the bones and the location were good, and it was always a dream of mine – because it’s such a cool building – to gut it and start over and put it back to what it used to be,” Markie Zacharias said.

The building was taken down to bare walls (its “bones,” as Zacharias puts it,) and rebuilt with new plumbing, electrical, heating and air conditioning systems.

“Ninety-eight percent of it is new,” she said.

Markie wanted to keep the name Castle Inn but decided a rebranding would sit better with the complete remodeling as a one-off, boutique hotel.

“I think it needed a complete rebrand,” Zacharias said. “If we were going to change it, we needed to change everything.”

“The Nest” also suggested a place of shelter.

The combined interior demolition and reconstruction cost nearly $881,000, according to county records, and was completed in time for most of the 21-room hotel to accept its first guests over the Memorial Day weekend.

Rooms rent for an average of $125 to $175 on nonholiday, nonweekend nights, Zacharias said. They plan to be open from Memorial Day through Labor Day.

But more important, Markie hopes the rebirth of the hotel will spur other re-development and a return of the East North Street corridor as the jumping-off point for tourists and other visitors to Rapid City and the Black Hills.

The street and many of the businesses had fallen behind the times and into disrepair, with many of the hotels turning to weekly rentals for low–income tenants.

The Castle Inn had been one of those places when the hotel was sold in a contract-for-deed arrangement in recent years before Markie and Tom, who also own and operate the Avanti Motel on North Maple Avenue, took over.

“We’re hoping that other businesses on and in that area can see that, just because you’re a little bit older, you can still make it worthwhile and up your game a little bit. Hopefully the rest of the area kind of follows suit,” she said.

And that is happening down the road on East North Street, which just completed a $20 million reconstruction of the road surface in 2015.

The old Colonial Inn at the corner of East North and Lacrosse streets has been razed, making way for a new Maverik Adventure’s First Stop convenience store, which is quickly building toward an opening in early fall.

O’Reilly Auto Parts is redoing the exterior of its building at 415 E. North St. The Wendy’s Restaurant up the block included an expansion of its parking lot in a former location of a long-vacant Pizza Hut restaurant.

“There’s a lot going on further down the street,” Zacharias said. “That makes a statement to the city that everything can be good and not everything is bad.”

That statement also made an impression on Ben Snow, president of the Rapid City Economic Development Partnership, when he visited the hotel and spoke with Tom Zacharias on Wednesday.

“I was actually excited to see that and complimented him on his investment in that property,” Snow said. “That tends to breed other like-minded property owners that say, well he did it, he can make it work … then maybe I can.”

Architect Patri Acevedo of JLG/AcV2 Architecture said the 41-year-old building was structurally sound but suffered from inefficiencies because of outdated utilities.

Headboards in the 21 rooms suggest the rolling, pine-covered slopes of the Hills, and open shelving, instead of furniture with drawers, provides a practical touch. Guests will be less likely to leave items behind, and the rooms will be easier to clean and maintain.

“Our goal was a building that performed really well,” Acevedo said.

“It was an interesting team where the contractors, the client and the designers all came together with exactly the same goal. Everybody was working furiously to make this happen,” Acevedo said.

Although The Nest is accepting reservations, there are still finishing touches to be added.

Yet to be completed is a patio area taking advantage of the hotel’s magnificent view of downtown Rapid City, which is also seeing a rebirth with the city’s downtown master plan and a push of development eastward from Fifth Street toward South Dakota School of Mines & Technology.

Zacharias and Acevedo hope the rebirth of The Nest as contemporary lodging will help the East North corridor connect to the rejuvenation of downtown Rapid City.

“I do see a lot of potential for that on East North,” Snow said.

Zacharias compared the decision to rebuild the hotel to the leap of faith the downtown area and the city made in forging ahead with the Main Street Square project several years ago.

“(Main Street Square) took a little (time) to get it to where it is now, and now it’s turned out amazing,” she said. “Sometimes you have to give a little to get a lot back in return.” 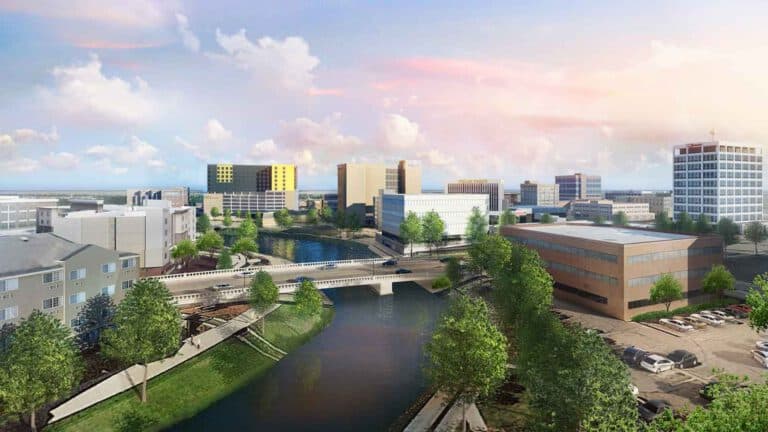