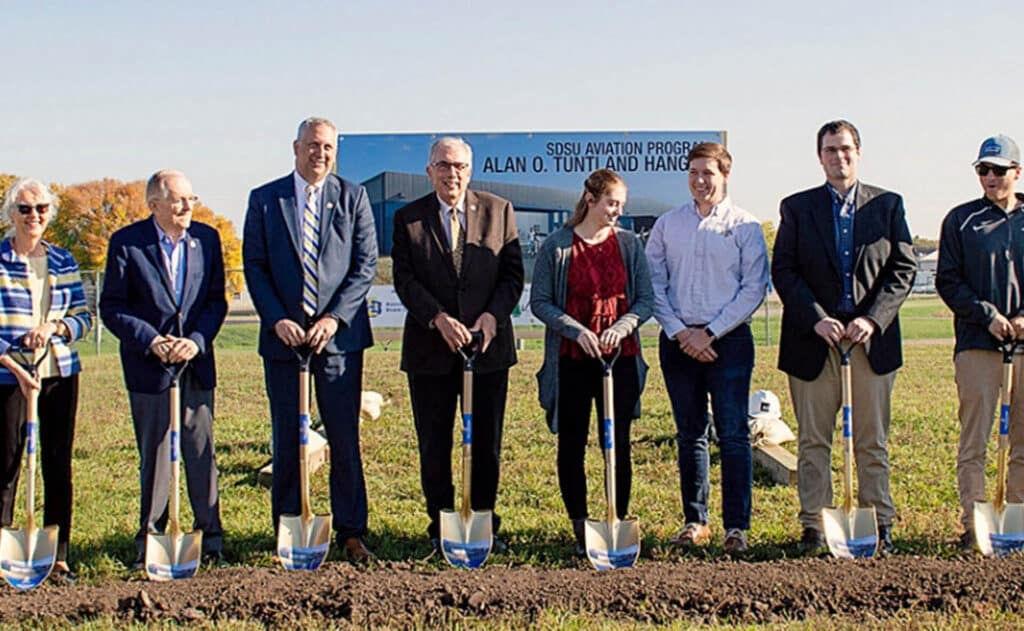 BROOKINGS – South Dakota State University broke ground Tuesday on a new hangar that will support its flourishing aviation program and honor an alumnus who has been the program’s biggest champion.

The Alan O. Tuntland Hangar is a 13,260-square-foot structure that will accommodate 12 owned and leased aircraft. Construction begins this fall and should be completed by late spring 2022. It is located in the northwest part of the Brookings Regional Airport and will more than double the current capacity.

Tuntland, a 1962 SDSU graduate, and his wife, Sharon, made a lead gift toward the project. He asked for a small plaque inside the hangar. Friends and colleagues made gifts in Tuntland’s honor to ensure his name would be placed on the exterior of the building.

Cody Christensen ’05/M.Ed ’06 joined the program in 2001 and became its coordinator in 2014. At the time, they planned growth from 65 students to 80, with the goal of reaching 120 students by 2020. “Through a robust job market, increased salaries, active recruitment and public-private partnerships like this, we knew there was opportunity for growth,” Christensen told the crowd. Today, the program has more than 180 students.

“The work that Al started with the Foundation really has been one of the linchpins for success in our program,” he said. “This opportunity we are presented today will allow us to support the needs of the program, provide pilots across the state and continue the land-grant mission of SDSU.”

The Tuntlands were unable to attend, as Al battles cancer. Tuntland’s longtime friend, Jim Woster, spoke on their behalf. Woster and Al Tuntland met in college. Tuntland earned a degree in mechanical engineering from SDSU and his master’s from Purdue. He had a successful career in finance, sales and printing. He has been honored as a Distinguished Alumnus and is a former chair of the SDSU Foundation council of trustees.

Woster shared the story that Al, as a 12-year-old, flew for the first time with his father, Olaf. At that moment, Tuntland decided he was going to be a pilot. He earned his license four years later.

“For Alan Tuntland, to be a part of something that ties South Dakota State and aviation together with the same yellow and blue bow, I can’t tell you just how special that is for him.”

Mills Construction is the general contractor on the project. JLG Architects designed the hangar.

SDSU to open Ness School of Management and Economics
Questions? Connect With JLG