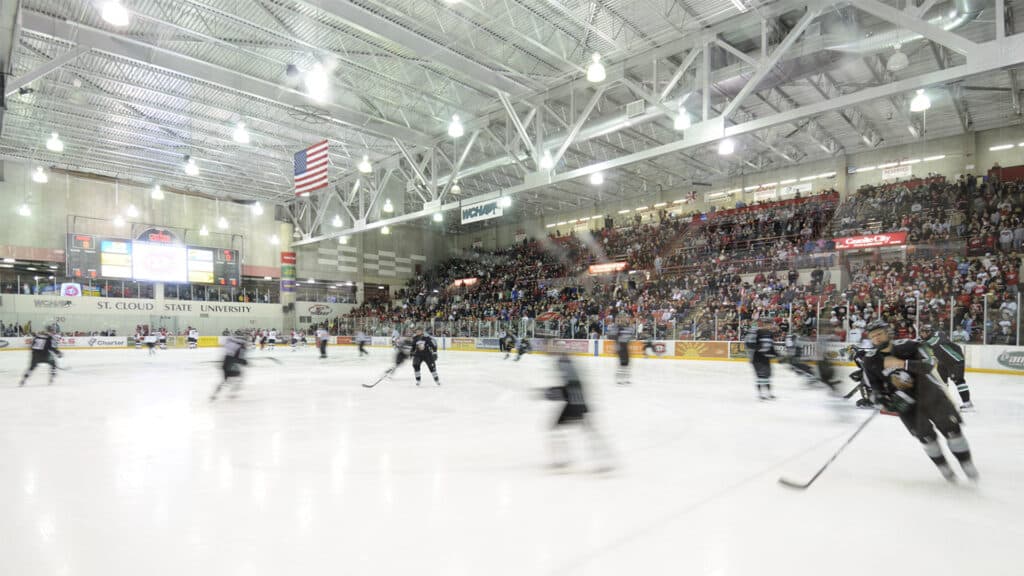 could reduce rink sizes
Back to Journal

In 2020, the production of R-22, the refrigerant used in most ice arenas, is ending. R-22 has been getting phased out in the United States for about the last 10 years because it contributes to the depletion of the ozone layer.

The amount that arenas use varies, but the Herb Brooks National Hockey Center at St. Cloud State University has 11,000-12,000 pounds of R-22 that help cool the cement floors of two Olympic-sized sheets of ice through a direct refrigeration system.

Cory Portner, the associate director of the Brooks Center, does not mince words about the state of the refrigeration system for the two sheets of ice at the facility, which opened in 1989..

“It’s the single most critical component of the facility and it’s very critical that we have a replacement strategy and that window is shrinking daily because we need a 2-5 year strategy for how this is going to go,” Portner said of the arena. “The industry average is 25-30 years for the life of the floors. Everybody should be very happy here that we’ve gotten 30 years out of two Olympic sheets of ice on a direct system.”

Replacing the cement floors for those two sheets of ice is not an inexpensive or quick fix. The project has a price tag of $8.5 million and would also include getting new boards, Plexiglass, lighting and improved humidity control. As a part of the Minnesota State Colleges and Universities system, St. Cloud State makes its capital requests through the system to the Minnesota State Legislature.

St. Cloud State will be asking for $669,000 for design work for the project from the Legislature in the spring of 2020 so that they hope they could ask for the construction money in 2021 as a part of the next bonding bill, according to Phil Moessner, Assistant Vice President for Facilities Management at St. Cloud State.

The Legislature did not pass a bonding bill this year, but Moessner is optimistic about the project.

“We’ve been getting a lot of positive support and we appreciate that,” he said of the proposal.

The need for a new system coincides with the end of production of R-22. In a direct refrigeration system, the piping is imbedded directly into the rink floor. While there is a lot of R-22 in use, the two rinks typically do not need a lot of it to be maintained.

St. Cloud State has 30 pounds of R-22 on hand for maintenance, which typically is the system getting topped off. But with production of R-22 about to end, Moessner said that the university has stockpiled a bit.

“We have recently ordered 500 pounds to have on hand as a hedge against rising prices for R-22,” said Moessner, who said the university paid less than $5,000 for that amount of refrigerant. “That should last us 5-10 years depending on what size leaks we have and until we can get a replacement system in place.”

Moessner agrees with Portner that the system has been maintained well.

“Our guys are very diligent, keeping it up and running and in good shape,” he said. “We have three compressors and, once a year, we build one. Two run the system and we have one backup. That’s more often than it needs to be done, but we’re trying to make sure everything is in as good a shape as it can be for as old as it is.

“With R-22 going out of fashion, the system is just getting old and it’s time to look at replacing it.”

So without R-22, what refrigerant is the university looking to use in the new system?

“I think we need to use a natural refrigerant,” Portner said. “Ammonia glycol is natural. If you release it into the air, it’s going to stink, but it’s a natural part of our environment. It’s a little more dangerous to work with in a system, so you have to be cognizant of that.

“At the same time, when it’s discharged into the atmosphere, the global warming and ozone depleting potential is minimal compared to (R-22).”

When the university gets funding for the floor renovation, there is a plan to change the sizes to both sheets of ice at the Brooks Center.

Both rinks are Olympic-sized sheets, which is 200 feet long by 100 feet wide. When a new refrigeration system is installed, the university plans to make both sheets of ice smaller. On the main rink where the Huskies play games, the ice may be reduced by 1 foot in width or a little more.

Portner said that he would love to make the rink NHL-sized (200 by 85), but it is not possible because of location.

“The challenging thing with our main rink is how we sit in relation to the water table,” he said. “We can’t excavate any lower, so we’re going to have to stay at the same grade. If we were to shrink this to an NHL-sized, that would give us 7 1/2 feet on either side.

“We can’t add another row of chairs because we can’t go down (in the ground). It would require us to reconstruct all of the risers and stringers and that’s another cost that we don’t want to throw into the mix. It’s going to be a foot or two (in), so that it’s maybe 97 (feet wide).”

What would the advantage be to moving it in such a relatively small amount?

“Every square inch that we aren’t refrigerating is savings,” Portner siad. “Every square foot that we don’t have to resurface is time back. To resurface an Olympic sheet of ice is in the 11-12 minute range. If you have an NHL rink, we realistically have a resurface time of 8-10 minutes.”

It also would help for seating for youth hockey games played on the rink. Currently, there is room for two short rows of bleachers on either side of the penalty box and one row of bleacher seating behind one of the goals.

“If we shrink it, the eastern side (where team benches are) would be as tight as it is today (to the wall) and we’d try to gain all of that 15 feet on the western side for seating and to give people some options to watch the game.”

While the St. Cloud State men’s and women’s hockey teams are the top tenants for the Brooks Center, there are many regular users for the facility. St. John’s University, an NCAA Division III team, also practices and plays its home games there.

The St. Cloud Youth Hockey Association rents more than 600 hours of ice time at the Brooks Center annually. The arena also plays host to 10 camps during the offseason, which helps keep the facility in use year-round.

The offseason user groups are a concern for St. Cloud State officials for when the renovation of the floors comes about. The floor renovation would begin with the ice being taken out the day after after the last possible game for its main tenants, according to Portner.

Why so quickly? The project will take 3-5 months to complete, beginning with a jackhammer being taken to the concrete on both rinks.

“We’re going to need every bit of time that we can irk out because it’s a massive undertaking,” Portner said.

During project construction, Portner will be doing his best to keep all of the camps that he runs in nearby facilities. For instance, Portner has had discussions with Todd Bissett, Municipal Athletic Complex’s operations manager, about doing an exchange.

“My job becomes, not so much project managing the construction aspect, but where do we put all our user groups,” Portner said. “We need to start planning today so that we can have a plan for those user groups when this happens.”