Rising from the street

Selkirk on Fourth condos underway
Back to Journal

In the wake of several proposals to redevelop historic sites and bare lots downtown, not all developers have committed to beginning construction this summer.

From a six-story highrise at the historic North Fourth Street Lyons Garage site to a new multi-use building on an empty lot off of DeMers Avenue, the city has recently reported its downtown is slated to experience a “billion-dollar boom” in investments.

So far, the only project underway is an $8 million Selkirk on Fourth condo development on South Fourth Street, a lot formerly occupied by Arbor Park. Developer Kevin Ritterman, of Dakota Commercial, said he plans to wrap up construction by fall, despite what he called a “tough winter.”

The strip of South Fourth Street where the project is being built has been closed since fall 2018. Ritterman said he hopes to re-open the street at some point this summer.

As for Selkirk’s first two floors of commercial space, Ritterman said he’s had some interest but no committed tenants.

“We’re open to all types of businesses,” he said.

Ritterman said he plans to begin construction on another multi-use development on the corner of DeMers Avenue and North Fifth Street. The $10.5 million Pure Development will offer 50 residential units for rent, a Hugo’s grocery store and a drive-up Alerus Bank site.

“We’re hoping to be on the ground by June,” Ritterman said. “No later than mid-June.”

Ritterman said he plans to have the entire building ready by summer of 2020. The project isn’t expected to close any nearby streets.

“It’s a little bigger site to work from than Selkirk,” Ritterman said.

Half of the 50 residential rental units will be classified as affordable housing, available to low- to moderate-income tenants, after the project was awarded $1.1 million from the North Dakota Housing Incentive Fund in 2017.

The other 25 rental units will follow general market prices, Ritterman said, ballparking those between $900 and $1,300 a month.

“Obviously, the more home ownership you can get downtown the better. So adding condos and apartment rentals is a positive thing,” Ritterman said. “I think the grocery store element to this community will be second to none. Things are going really good for downtown right now.”

Other projects wait to move forward
Developers for other downtown projects have said they need more time to finalize plans and attract tenants. That includes a project from JLG Architects called the “Argyle,” on Fourth Street and DeMers Avenue.

Named for a building that occupied the same lot from 1914 until the flood of 1997, the Argyle will cost approximately $5.6 million to construct. Renderings show a five-story-tall building with market-rate residential units for rent on floors three through five and commercial space downstairs.

“Really, there isn’t in update at this time in terms of the project breaking ground or anything like that,” said JLG Architect Mike McLean. “We’re still actively looking for that first-floor tenant.”

McLean said the company is seeking a restaurant or retailer to occupy the main floor of the proposed Argyle.

“Until we find that were not moving forward on the build yet,” McLean said. “I mean, the most ideal case would be to find one today, right, where we can take advantage of the summer construction season. But were ultimately trying to hit that breaking ground before this next fall or this next winter.”

That six-story-high project will offer anywhere from 9,000 to 18,000 square feet of commercial space and 134 residential units for rent.

Most of those units will be studio apartments, with some one-bedrooms and few two-bedrooms.

Estimates from Northridge President Jon Miskavige in December estimated unit prices will range from $700 to $1,600 a month, depending on size and cost of construction.

“We’re kind of just right now trying to develop two projects that we’ve got out on the south end,” said Miskavige, whose company will begin constructing a 160-unit apartment complex on South Washington this summer. Northridge is also helping build a recently announced senior living facility from Edgewood.

Miskavige said he hopes to focus more on the Lyons site project this winter, possibly applying for tax increment financing from the city by early November.

“We just felt that with Hugo’s going this summer, it was probably a better fit for us to hold, let them get their project going and stabilize going forward,” Miskavige said, referring to Ritterman’s Pure Development project. “We’re not in a huge hurry.” 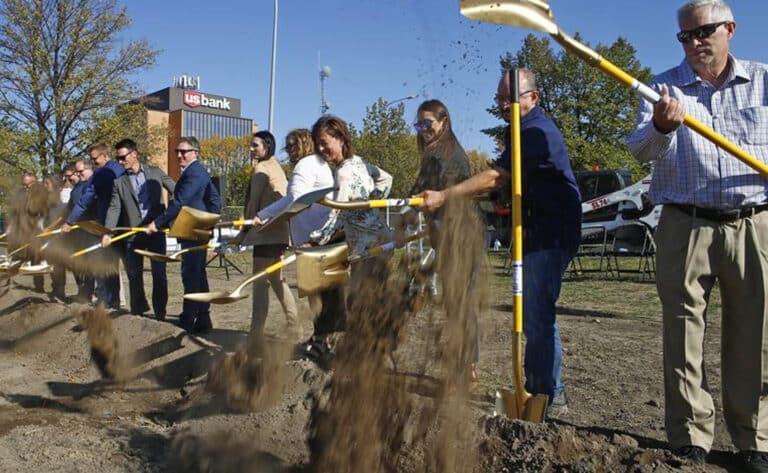