The answer is not always obvious
Back to Journal

On today’s campuses, facilities play a more important role than ever before. Keeping up with changes in pedagogy and student lifestyles requires buildings that are more flexible, open, and wired. Students also have more options, including online learning. As a result, facilities are increasingly a differentiator in creating a university brand that brings students, faculty, and opportunities to your campus.

Deciding between creative re-use of an existing building or new construction is not an architectural decision that happens in a vacuum. Building design is a problem-solving tool, and in order to be effective, it’s critical to understand all the problems that you are trying to solve. In fact, in many cases, the solution you end up with may not be the one that you’d initially identified.

What should factor into your decision? Let’s look at two examples and the considerations that led to very different solutions.

As part of the state’s Healthcare Workforce Initiative to address healthcare access and delivery issues, the University of North Dakota (UND) School of Medicine and Health Sciences in Grand Forks needed to train 25 percent more health care providers. At the same time, the school was embracing collaborative learning and operating out of two buildings.

The school commissioned a rigorous study of how its current facility—a repurposed older hospital—was being used, and found that it was already utilized to capacity, says Dr. Joshua Wynne, dean and vice president for Health Affairs. “We had to either renovate and/or build new construction,” says Wynne. “It was not a matter of whether to do something, but what to do.”

The university’s choice was new construction that offered a modest increase in square footage, but a dramatic improvement in efficiency and function. The new building incorporates almost all of the school’s educational, service, and research programs under one roof. Its design encourages walking and socializing and enables collaborative training approaches, including multidisciplinary learning communities with shared spaces and open laboratories.

“We are on the leading edge of this team-training pedagogy model and the timing was perfect in that we have built a building that accommodates and supports that,” says Wynne. “We can now easily accommodate growth in our research programs—we currently have more funded research than ever before and still have space for growth—and a 25 percent increase in class sizes.”

At South Dakota State University (SDSU) in Brookings, several academic departments needed space. They were looking to Harding Hall, an empty 1950s-era residence hall, to house the Economics, Psychology, and Sociology and Rural Studies departments. In evaluating the departments’ space needs, it was clear that they would not all fit. The scope was pared back to house Economics, whose needs best fit the space, says Jonathan Meendering, project architect for SDSU. This allowed the design team flexibility to add common spaces and daylight, remove a proposed addition and locate classrooms in the lower level, and create a stronger exterior impact.

“Without a detailed understanding of the programmatic needs, it would have been difficult to achieve a design that feels as open and cohesive,” Meendering says. Limiting the program, he adds, made it possible to reinvent the building into one that feels new and changes preconceptions of what a renovation can be.

Understanding a building’s mechanical, electrical, structural, and durability capability is key to deciding whether a renovation makes sense. A poorly constructed building is unlikely to be worth saving. UND’s existing medical school, for example, not only posed space challenges, it was also built like a bunker. The lack of cellular service presented safety, security, and convenience issues in a building that is open to students 24/7. It had no central air and needed new mechanical ductwork, which would have required columns in classrooms. The trade-offs in compromised academic space, and costly deferred maintenance, energy spending, and operations ruled out renovation.

South Dakota State’s Harding Hall had never had HVAC systems, and its floor-to-floor heights meant limited space for ductwork. Yet it could still fill a need for modern academic space that meets current accessibility, HVAC, and life safety standards. The space made sense for an academic department that needed office space and classrooms, not labs. A modern chilled beam system could fit within the structural limitations and improve user comfort by providing local temperature controls.

Renovating may mean shutting down your building and temporarily relocating users or phasing the work and moving users around the construction areas. While new construction has no occupants to accommodate, the building location may cause some campus flow disruption. Your project timeline, potential disruptions, and the costs of operating out of alternative space should all be weighed.

“What are you going to do if you have to take that space out of circulation while still operating your program?” asks Wynne. “For us, it was a turn-key operation. Life went on during the construction and we moved in a well-orchestrated manner. We would have had to rent trailers if we renovated the old building, and that could have been an enormous problem.”

A building’s location, character, and history all have follow-on effects, so weigh those factors carefully. For example, if you have a dining hall located between residence halls, building a new one two blocks away is not ideal. The cost and environmental impacts of building construction are also important considerations. In a campus setting, there are often ancillary costs and impacts with demolition, such as working around the utility networks that connect buildings on campus.

“One of the arguments against renovation was that Harding Hall was detracting from the character of the campus,” says Meendering. “But we needed a building in that location, and there were campus utilities running through the building that would make new construction very challenging.” Today, the renovated building has improved flow and connection in this part of the campus. Changes on the north side of the building reinforce a pedestrian corridor that links residence halls to the engineering quad, and the new entry lobby and large windows make a dramatic exterior statement that ties into the aesthetics of the Architecture, Mathematics, and Engineering Hall.

Often, budget is listed as the most important consideration. However, upfront costs are not always the deciding factor; nor should they be. A side-by-side comparison of options can be revealing. The cost of renovation versus new construction was a primary concern for Harding Hall, says Meendering. “There was a notion that renovation may cost more than demolition and construction,” he says. In reality, the project cost has been approximately $70 per gross square foot less than the average new building on campus, without accounting for demolition and infrastructure reconstruction required by new construction.

UND and North Dakota’s state legislature evaluated two lower-cost renovation scenarios, but chose the most expensive option: a $124-million new building. Along with the higher price tag came a compelling return on investment that could not be matched by renovation. Not only will the new facility best meet the state’s Healthcare Workforce goals and the university’s academic goals, it also saves on the legacy costs of operating an older building and significantly improves the university’s Facilities and Administrative (F&A) rate for sponsored research by spending state funds on the research space.

Whether the facilities problem you are trying to solve is large or small, there is no one-size-fits-all approach. A thorough decision-making and planning process that considers all of the above factors offers peace of mind that allows you to put second-guessing aside and turn your full attention to executing the best solution possible. 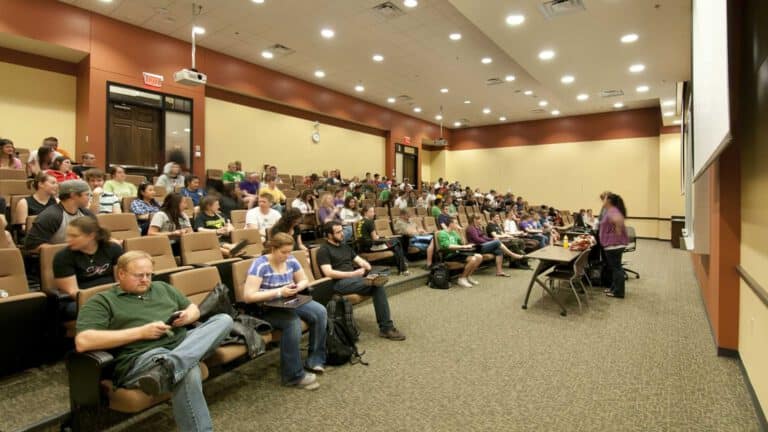