With ideas from the community and staff
Back to Journal

Over the last few years, a North Dakota healthcare system has taken a step back and focused on addressing what its community needs – community based, top-of-the-line healthcare facilities and services. A new $305 million-dollar Altru hospital in Grand Forks, slated for completion in 2022, hopes to meet those needs for the region it serves.

After a significant structural failure, the old ambulatory clinic was deemed unsafe. Rather than rebuilding, Altru dispersed its services to its other clinics and moved forward with a project: a comprehensive, full-service hospital.

“Altru’s hospital is an important part of North Dakota’s plan to keep its community healthy,” says JLG project architect Todd Medd. “With local services available, North Dakotans are able to get top-tier quality care at home, rather than having to bear the cost and time traveling out of state.”

In a joint-venture operation, Minneapolis-based PCL Construction and Grand Forks, North Dakota-based Community Contractors (PCL/Community) partnered with JLG Architects and HKS Architects to build Altru’s new hospital. Design and preconstruction on the project started in the spring of 2018 and construction is scheduled to break ground in June. The PCL/Community and JLG team recently completed the University of North Dakota School of Medicine and Health Sciences, a $105 million-dollar education building.

“Our work at the medical school set us up to build this project,” says PCL project manager Derrick Deering, who worked on both the medical school and now on the hospital. “Building the practice labs and exam rooms exposed us to all of the construction elements specifically needed for creating a hospital. From infection control practices to air and filter control, we had a clear understanding of what Altru would require.”

The JLG and PCL/Community team began by communicating and educating how the construction design processes were going to be utilized. They hosted several workshops focused on designing health care spaces that adapted to the way Altru staff and end users were planning to deliver care, and creating as much future flexibility as possible.

“JLG and our design team wanted to create a team culture that allowed the end users of the hospital to be as integrated into the design process as possible, not only to leverage their expertise in how they work, but also to gain buy in,” says Medd. “We understand that they also have full-time jobs, so using an integrated workshop process streamlined the design to limit the impact on their already busy schedules.”

According to Altru’s masterplan goals, Altru’s vision of its multi-functional hospital was to create spaces that were more than just functional and operationally-efficient, with advanced technology and support for patients. Medd said the PCL project team recognized it was important to create the right design the first time, rather than making changes throughout construction – which can increase costs.

The team created multiple physical room mock-ups to allow for a better understanding of what the hospital needed and how it would function. These full-size models or mock-ups were created in a warehouse space, allowing JLG, HKS and PCL/Community the ability to adjust the design.

Brad Hendrickson, PCL construction manager, said the mock-ups helped Altru staff to visualize their new space throughout the schematic design process. These rooms represented the different spaces that were going to be present in the future hospital, such as patient rooms, operating rooms, intensive care units, and labor and delivery rooms. Throughout the process, the rooms were transformed from foam core to actual representations of what they would include: walls with window and door placements, bathroom features, lighting and outlet options, hospital beds, exam and chart reading stations. The team utilized medical equipment from vendors and surplus hospital equipment to make the mock-ups as realistic as possible for enhanced user interaction.

During these mock-up reviews, Hendrickson said Altru’s doctors, nurses, physicians, physical therapists, patient advocates and other staff members tested out the spaces to ensure that they would fit their specific needs. Throughout the process, Altru employees said they were encouraged to rearrange equipment, outlets, casework and walls to best accommodate the patient and clinician workflow of the room. Hybrid operating rooms are designed to be versatile and efficient, allowing Altru to make the most of its budget and finish the room with the advanced patient-care technology. The over 200 rooms are also expected to exceed code requirements for compliance with the Americans with Disabilities Act.

“It [the hospital] will not be the same as the hospital as we’ve known it,” said Brad Wehe, Altru’s chief executive officer stated earlier this year in an article in the Grand Forks Herald. “It will be a unique facility that reflects the character of our community.”

From its conception, local community input was at the forefront for this project, said Hendrickson. The team hosted town halls, open-houses, focus-groups and neighborhood meetings to discuss the project and to gain feedback on both the design and function of the hospital. 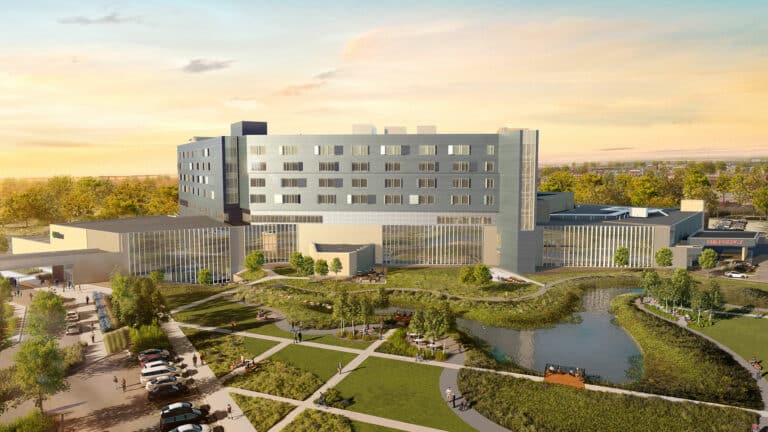