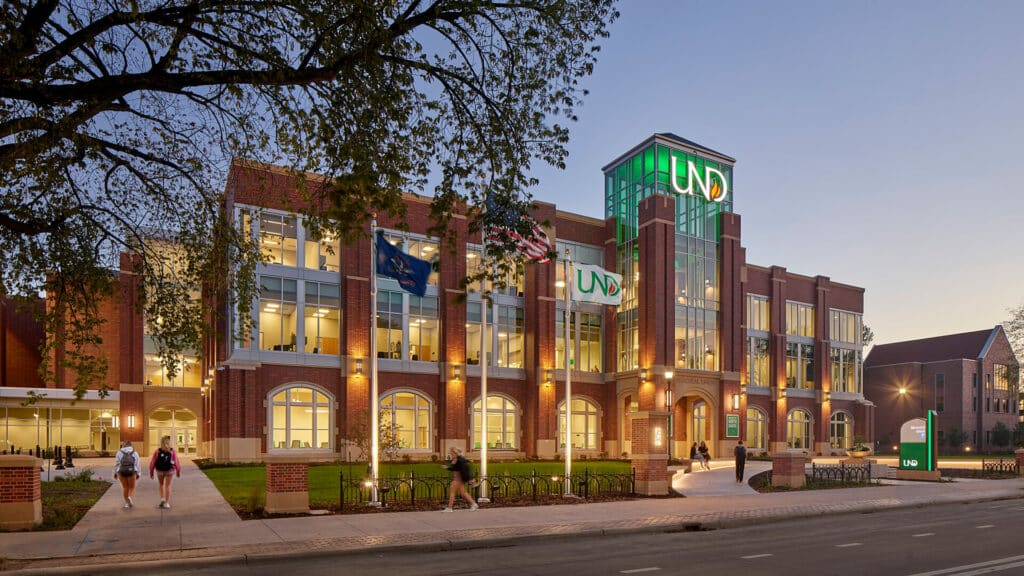 In 2018, UND students voted to raise their student fees to fund its $80 million construction. Now nearly complete -- a few finishing touches need to be put in place, a few pieces of furniture, some welcoming signage and a mural is set to adorn the wall a few steps from the entrance -- it reflects students’ desires in a building dedicated to them.
Back to Journal

Having been open for a little more than a week, UND students are making use of the new Memorial Union, a building made possible by and for UND students.

In 2018, they voted to raise their student fees to fund its $80 million construction. Now nearly complete — a few finishing touches need to be put in place, a few pieces of furniture, some welcoming signage and a mural is set to adorn the wall a few steps from the entrance — it reflects students’ desires in a building dedicated to them.

“We want this to be a place that students are wild about and that they utilize while they’re here,” said Cassie Gerhardt, associate vice president of student affairs and diversity, and associate dean of students. “The students passed this because they believed it would help with recruitment and other things on the campus, and that’s the goal. It is the students’ Memorial Union.”

The building opened on Monday, Aug. 23, the first day of class for the fall semester, and since then students have entered it to socialize and study. On Tuesday, Aug. 31, when the Herald was invited to tour the building, group study rooms and a portion of the expansive main ballroom were occupied and students sought out quiet corners on each of its three floors to hit the books.

Studying there, or just hanging out, is facilitated by an abundance of natural light, one of students’ chief wishes for the building. Towering windows on the building’s south side are made of electrochromic glass — glass that tints as the sun hits it. Staff there can also adjust the tint as needed. It’s installed in key locations in the building, and helps with temperature control, making the building more energy efficient.

And energy and the devices they run are also important to students. Charging ports are readily available at study tables and rooms, and can also be found in some of the furniture. Gerhardt said the building’s design incorporated what could be called a “rule of five.” For each person, up to five devices can be connected to wifi.

“Our ballroom really is seating about 1,400 for a theater style event,” Gerhardt said. “We should be able to support 5,000 plus (devices) on wifi at any time.”

Upon entering the building, which comes in at 158,351 square feet, people are met with the university’s seal emblazoned across the floor — Gerhardt said she doesn’t walk on it, and joked it should be marked off from others doing the same. The university’s motto “Lux et Lex,” meaning “light and law,” is showcased on a wall, as is an installation commemorating UND’s first graduating class.

Those features, including large “UND” lettering above the entrance along University Avenue, and a green and black color scheme, are part of UND branding efforts to instill a sense of place for students and visitors.

“We wanted people to know they were at the University of North Dakota,” Gerhardt said.

The building now houses student-centric offices, including One-Stop Student Services, Career Services, Student Diversity and Inclusion, Student Involvement, the Pride Center and the International Center. The offices of the Student Government are located on the first floor, in a wide space allowing for easy interaction.

“(We) encourage students to use this open space so that they might better come to us or come to Student Involvement,” said Kaelan Reedy, student body president. “A big priority of student government being here with this open space is so they would enjoy our office, and then come talk to us as our constituents.”

One of the more unique features of the building is the “social stair,” a broad wooden staircase leading down to a basement entertainment area. Each step on the stair creates a broad seating area, a place, perhaps, to watch a UND sporting event.

Two ballrooms equipped with Loop assistive hearing technology are located on the second floor, and about 18 meeting rooms are located in the building. The rooms will soon feature technology for on-site and remote collaboration.

Students also wanted nationally recognized dining options for the Memorial Union. Restaurants like Chick-fil-A, Panda Express are the result of those desires, as are UND Dining options, including the 1883 Grill, University Avenue Pizza and Dakota Deli. Reedy joked that he “might have been” on the committee that selected Panda Express.

A Starbucks and convenience store round out dining and shopping options, and are set to open later in September.

Multiple naming opportunities are available in the building and donations will be set aside to assist students, either through scholarships or other avenues like the university’s Angel Fund. Visitors won’t find a “Badlands” room or a “River Valley” room in the Memorial Union, unless donors choose to name them that way, Gerhardt said.

In an effort to “future proof” the building, a modular flooring system has been installed. Portions of the floors can be pulled up and reorganized to account for future electrical needs.

Concerns about the pandemic also played a role in the building’s design. Camera technology in meeting spaces will allow people to collaborate remotely, and the building will be outfitted with sensors to let administrators know how many people are in the building. Occupancy can be reduced, if the pandemic worsens.

“It would be a full-occupancy sensor, so we’ll be able to tell what occupancy is in the building at that time,” said Aaron Flynn, assistant director of facilities and operations at the Memorial Union. 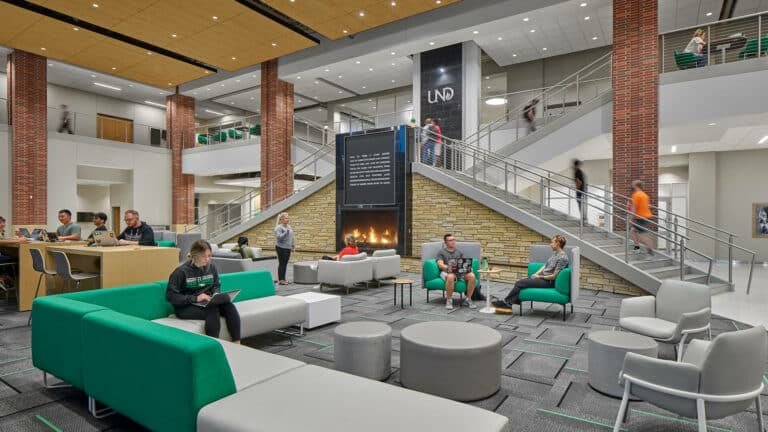