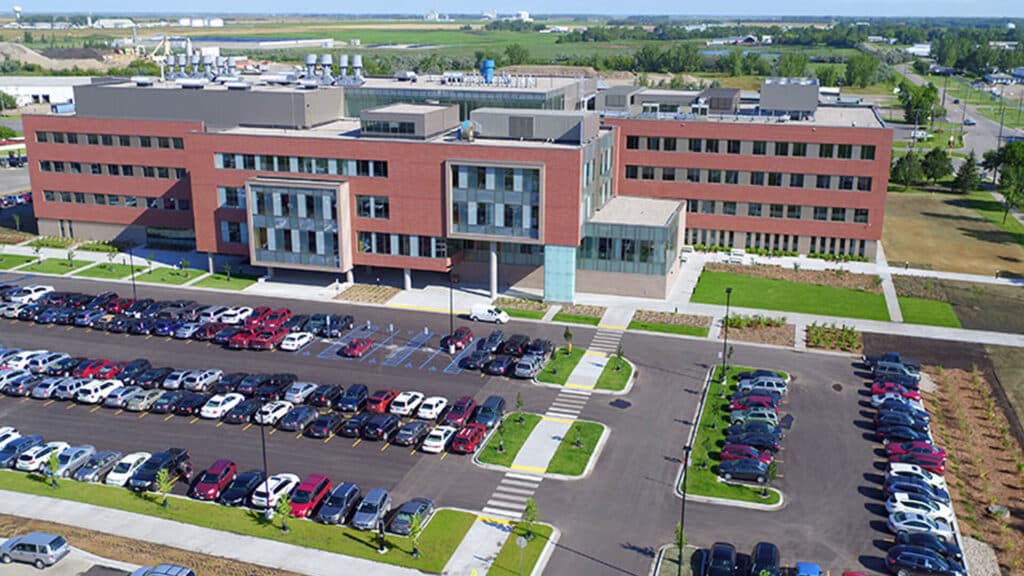 Medical-school applications boom: A good problem to have

UND’s medical admissions staff grapples with ‘Fauci effect’: a big jump nationwide in applications to medical schools
Back to Journal

“In fact, nearly two dozen medical schools have seen applications jump by at least 25% this year,” one AAMC report put it, adding that whereas the year-over-year increase in applications has averaged below 3 percent nationally over the past decade, many schools have seen double-digit spikes in medical school app rates in 2020-21, relative to 2019-20.

The UND School of Medicine & Health Sciences (SMHS) is no different.

“Last year, our total applications were 1,451, but this year they’re 2,064,” explained Alyssa Montgomery, admissions officer for the SMHS Office of Student Affairs & Admissions, describing the difference between initial and “finalized” applications the school receives through the American Medical College Application Service (AMCAS) as sort of like the difference between gross and net income. “But finalized apps are up too. This year we had 1,188 finalized apps. Last year was 655.”

That’s an 81 percent increase, which is an astounding spike in applicants to the only medical school in North Dakota in one year and outpaces the increase seen at most other American medical schools.

Although the reasons for the dramatic bump vary by college, Montgomery’s supervisor Jim Porter, Ph.D., associate dean for Student Affairs & Admissions at the School, admitted that at least some of the increase at the SMHS can be attributed to the so-called “Fauci effect.”

Named after Dr. Anthony Fauci, the director of the National Institute of Allergy and Infectious Diseases who became a household name in 2020 for leading the White House Coronavirus Task Force, the Fauci effect describes a boost of interest in health sciences careers – physicians, nurses, public health professionals – among Americans of all ages.

“Everyone has a reason for going into medicine and maybe that was it,” said Porter. “We hear that all the time in interviews. We ask [applicants] why they want to go into medicine and they all have different stories, but the common theme is some kind of event in their life that happened to either them or their family.”

The most serious and widespread global pandemic in more than a century certainly fits that bill.

That said, Montgomery added that a variety of other factors made applying to medical school easier in 2020, including the fact that all interviews were conducted virtually.

Plus, Porter added, emerging COVID regulations meant that it wasn’t clear last summer and fall if students would even be allowed in the hospitals to bulk up on shadowing experiences with already overtaxed physicians.

“A similar argument can be made for a college course that would be beneficial to have on the applicant’s transcript,” he said. “Knowing that a lot of undergraduate courses at other
institutions were limited during the pandemic, applicants submitted applications without courses or shadowing that would normally strengthen their submission.”

Whatever the reason, the bump in applications to not only medical schools but other health programs – such as UND’s Master of Public Health program, which saw an 80% increase in completed applications since 2019 – has put admissions committees in the enviable position of having a larger, and arguably stronger, pool of applicants to consider, even if the increase has also meant more work.

“It seems like the applicant pool we’re interviewing this year, I’m thinking, wow, these are some good kids we’re interviewing,” gushed Porter. “I’m excited to see what the make-up of the 2025 class will be — I think they’re going to be very competitive.”

All of this raises a series of related questions for medical schools, though, who understand all too well that the AAMC has put the likely physician shortage number in America between 54,000 and 139,000 physicians of all specialties by 2033: how do they budget for a similar bump next year, do they increase class sizes, how might they incentivize the best applicants to choose their school over others, and what happens if the number of clinical and/or residency slots for third- and fourth-year students and new MDs can’t keep pace with any increase in quality med school matriculants?

“The impact of this on UND is more nuanced because our class size is largely fixed, not so much by finances or policy but by the clinical opportunities that medical students have after their initial education,” added SMHS Dean Joshua Wynne, speaking to the challenges of teaching medicine at a community-based school in a largely rural state with mostly volunteer clinical faculty. “Our building could accommodate more medical students, but UND doesn’t manage its own hospital, so our students go out into the clinics and hospitals throughout the state for rotations after their initial experiences in the classroom. It’s here that the opportunities for expansion are more limited.”

The case is similar, Wynne and Porter both said, with PostGraduate Year (PGY) or “residency” slots for new MDs, which are likewise limited in North Dakota and nationally.

Calling the effect named for him “very flattering,” Fauci told National Public Radio last year that “a more realistic assessment is that, rather than the Fauci Effect, it’s the effect of a physician who is trying to and hopefully succeeding in having an important impact on an individual’s health, as well as on global health. So, if it works to get more young individuals into medical school, go ahead and use my name.”

Whatever the cause or name of the phenomenon, it has highlighted another challenge for UND: the need for more scholarships.

“One real limitation is recruitment scholarships,” said Jenny Duffy, associate director of financial aid for the Office of Student Affairs & Admissions, adding that to stay competitive with other schools UND needs more impactful awards, renewable for each year of medical school. “We have excellent candidates from North Dakota that we want to stay in-state, not only for medical school, but as practicing physicians in the future. Many of our applicants are getting multiple offers, which is where recruitment scholarships are key to keeping these students in-state, while also helping fulfill the School’s goal of reducing student loan debt.”

This matters because medical students graduate with an average debt load of $160,000.

To compensate, said Wynne, the SMHS has kept tuition lower, by far, than even other Midwestern medical schools: “Our costs are lower than most medical schools. And looking at where students go — residencies and where they practice and what people tell us about them — they are superbly trained and have less debt than most medical students. That’s the value proposition of our school.”

“The reason people come here — and you can see it in the interview — is because they want to work as a doc in a small town and help their community,” concluded Porter, referring to data that applications to the SMHS from North Dakota-based students are up 37 percent.

“There are several kids that are 100 percent North Dakota-educated, have high [Medical College Admissions Test] scores, a 3.8 GPA, and excellent experience. They could easily go to other places, but they want to go here. And if they sometimes can’t, we need to find ways to keep them here.”