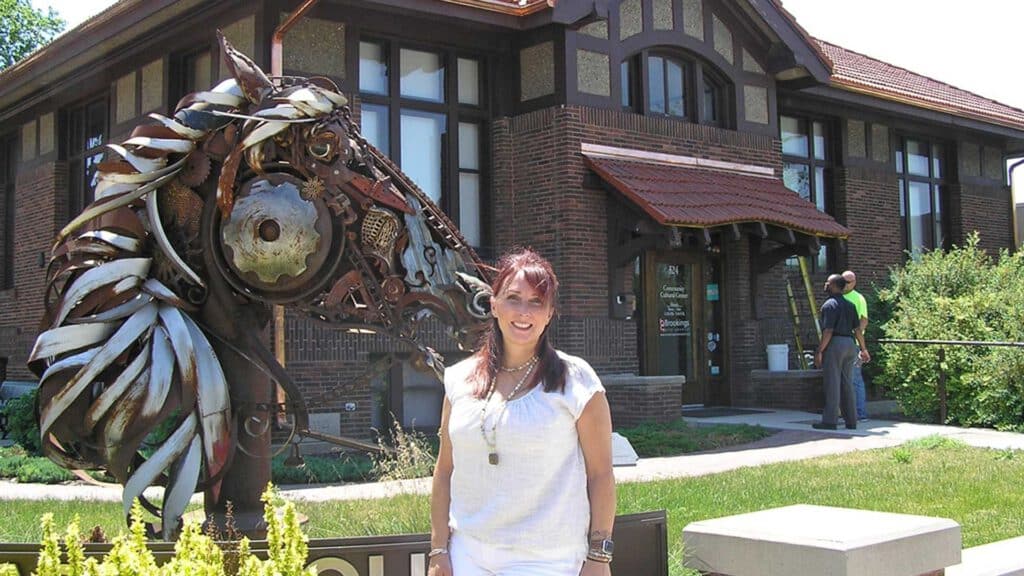 Honoring past, looking to future at BAC

Donor, city help give old Carnegie Library a much-needed makeover
Back to Journal

The Brookings Arts Council is the heart of what BAC executive director Heather Kuhlman likes to think of as the creative center of Brookings.

With the neighboring Children’s Museum of South Dakota and the Brookings Public Library nearby, it’s hard to argue the point.

But the old Carnegie Library building the BAC calls home was in desperate need of a lot of elbow grease to bring it into the 21st Century.

Thanks to the cooperation of the City of Brookings and an anonymous donor, about $534,000 has been put toward a massive renovation project that started in October. The BAC has been closed since work began.

Showing its age
Built in 1914, the two biggest areas the building showed its age were its electrical system and its air conditioning capabilities. During the annual Festival of Trees, Kuhlman would have to choose between having the trees stay lit or running her computer.

As for the air conditioning, two window units struggled mightily to keep the building down to a reasonable temperature.

Both problems will be a thing of the past once the BAC moves back in. Kuhlman is most excited about the new air conditioning system, which is much quieter and will create a better environment for artwork.

“Humidity is a big problem with artwork. It buckles or expands and contracts. So at times, that was an inhibitor to some exhibits because you could not temperature control or humidity control the building,” she said.

It could also impact visitors.
“If it’s not environmentally pleasing, nobody comes or you cancel things. This building only exists because people love it and enjoy being within it and creating art. If the environment can’t handle that, it stops,” she said.

The main gallery had carpet on all the walls so that artists could pin their work into it. The carpet had gone up to wood trim that ran about the room.

The west wall had the carpet removed and the other walls of the main gallery had new carpet placed. The wood trim that demarcated the upper limit of the wall-carpet was also removed. Art rails were installed onto the west wall to handle heavier pieces.

The room looks much crisper, with a more modern atmosphere while maintaining its historical feel with a period chandelier. Specialized lights have also been installed that will better light the artwork without color cast

Hardwood floors
Out are the old linoleum floors in favor of a new hardwood floor (the baseboards are still the original) that is in keeping with different flooring options for the historical building. Carnegie Libraries such as this would have utilized one of three flooring options: carpet, linoleum or hardwood.

“We honestly don’t know what was originally in this building, if it was wall-to-wall wool carpet with a border, if it was linoleum or hardwood. But our building did not denote what they had. South Dakota Historic, Brookings County Historic, SDSU: Nobody knows,” Kuhlman said.

No where have they been able to turn up a document that mentioned what was originally in place, no photo has been found that can show what the flooring originally was.

“So they decided to go with the hardwoods, which I think is beautiful.”

Even the radiators, which aren’t used anymore, will remain a feature of the gallery. They had them removed and sandblasted away years and layers of paint. The radiators were then shellacked to give them a clean, metallic gray look again.

They’re now mobile, too, thanks to being set on sliders that won’t damage the new hardwood floors. This will allow them to be scooted elsewhere if they need a little extra room in the gallery.

“All of the parts that did not get reused with the building have been retained. Nothing was dumped or sold,” Kuhlman said.

There weren’t any concerns about maintaining historical essence of the downstairs classroom. Through the years, it’s been renovated countless times.

They took out the concrete floor there, which had heaving so bad at spots that they would put phonebooks underneath table and desk legs to keep them level.

All of this wasn’t just annoying. Since a lot of those who use the space are retirees or are developmentally disabled, it was a safety risk. Now they can put those books away thanks to the new, level floor.

“It’s wide open and nice. It’s kind of industrial look because we had to run all the ductwork somewhere; I think it’s kind of cool,” Kuhlman said.

There are more electrical outlets, and they drop from the ceiling so there’s no tripping hazard from a tangle of extension cords.

The kiln was moved out of the downstairs kitchen into a separate room. In its new location, they have an overhead vent that will help maintain the temperature of the room, sucking up the hot air and piping it outside. This also has the added benefit of sucking up fumes when the room is utilized for spray painting or varnishing or other similar tasks.

This move also makes the kitchen much more functional. When the kiln was in the kitchen, it would turn the room into an oven, getting the space up to 400 degrees. Anything in the fridge or freezer would melt, Kuhlman said.

“There was no vent system so that (heat) permeated into the lower level, which we were controlling with one window air conditioner. So we were a highly inefficient building at best,” she said.

The outside has also been touched up in the renovation process.

Pointing to the clay tiles on the roof, Kuhlman said, “They only broke 14 in the removal of the entire roof to put the underlayment back on and then put the tiles back on. That’s insane. The clay tiles are original. We have new gutters and copper flashing, which will patina out incredibly.”

Grateful for generosity
Kuhlman wasn’t sure she’d ever see all this work happen, so she’s grateful for the generosity of the donor and the work of the city and the support of BAC members. And as excited as she is about all the sweat that’s gone into the renovation, she knows members and the community will love it just as much.

“I think the community will be overwhelmed by just the aesthetics of the building. It’s a huge change.”

The first event to take place in the building following the renovations will be the Fine Arts Exhibit on Aug. 9. After that is a members-only event on Aug. 10, which will be a celebration and thanks to the city, the donor and to the members whose support and patronage made this possible. Hors d’oeuvres and tours will be given.

Those interested in becoming members can do so through the BAC website by clicking “2016 Membership Form” under the Membership tab.

A formal grand opening for the public will take place in September; however, a date has yet to be determined.