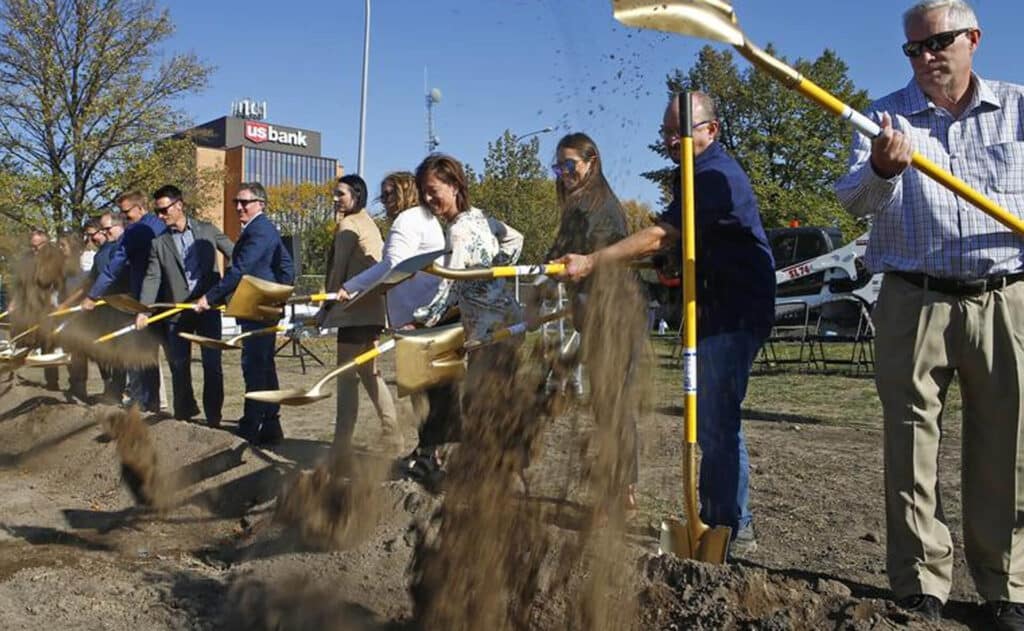 Governor marks end of a months-long street project, then helps break ground on The Beacon.
Back to Journal

Burgum came to Grand Forks on Tuesday, Oct. 5, to hear progress updates on various development projects, before setting off on a walking tour downtown to see 11 sites in person. Throughout the presentation, Burgum listened attentively to developers and business leaders, while taking notes and asking questions.

During the walking tour, the governor cut a ribbon to mark the end of a construction project on North Third Street and, later, participated in the groundbreaking of The Beacon, a project that will result in a new event center and living space downtown.

Nearly 40 people gathered in the Community Room at the Grand Forks Herald building Tuesday to update the governor on their projects. Burgum kicked off the presentations with words of praise for those in attendance.

“Grand Forks really exemplifies what can happen when communities and community leaders and the private sector and the public sector get together, and work in collaboration for the benefit of all the citizens,” Burgum said. “It’s inspiring to be here.”

And Tuesday’s clear warm weather turned out to be a good day for a walk. Burgum, Mayor Brandon Bochenski and several representatives trekked through downtown Grand Forks on a circuitous route that took them past the development projects.

First was a quick passing of the Lyons Auto redevelopment site. The project is a multi-story, mixed-use building across from City Hall. From there the group visited the Mill Square building on North Third Street, which houses the clothing boutique Kittsona, and some apartments. Burgum deviated from the plan by going inside and speaking with the shop’s staff and owner, a sort of window-shopping excursion.

After leaving the Mill Square building, Bochenski said he was proud of Grand Forks’ development boom, not just in the downtown area, but across the city. Many of those projects were in development before he took office, but he’s looking forward to more.

“I’m just glad to be able to build off that, but just in that meeting today and looking at the number of projects we’ve got going on, it’s hard not to be excited,” Bochenski said.

The first ceremonial event on Tuesday also happened on North Third Street, at the intersection with DeMers Avenue, just a few moments away. Burgum, Bochenski and others cut a blue ribbon to mark the opening of the street, marking the end of a months-long reconstruction project that saw the street widened.

A few yards away stands the St. John’s Block building, now being called the Block V project. The building is being remodeled into apartments, retail space and a plaza by Grand Forks-based Icon Architectural Group.

Burgum then made stops at the 701 co-working space, the site of his visit in 2018, when he discussed his Main Street Initiative program. He then moved on to other sites including the new Selkirk on Fourth condo development, followed by a stop at the Argyle, which will house JLG Architects’ offices when completed. He then went on to the Edgewood Corporate Plaza to tour the as-yet-unfinished Cloud 9 event center, before moving on to the recently-opened Harry’s Steakhouse.

The tour culminated with two of the larger developments downtown: Pure Development, the new Hugo’s market and Alerus branch with apartments above, and finally The Beacon.

There, on the site of the former Townhouse Hotel, Burgum and others tossed the ceremonial shovel of dirt, while construction equipment rumbled several yards away. The Beacon, developed by Epic Companies, will be the future home of a 40,000-square-foot outdoor plaza, public parking and an event space. As reported previously in the Herald, it will be able to host markets, trade shows, theater shows, movie nights, children’s’ events, hockey and other sporting events, art shows and more. It is estimated to be completed in fall 2023.

Developments like The Beacon, Burgum said, are what employers can show people when they are looking to recruit new workers.

“You’re going to say ‘come tonight because at The Beacon by Epic (Companies) there’s going to be a large event, come there and see the community that’s there gathered together at that event,’” he said. “And people are going to say, ‘I want to be a part of this community.’”