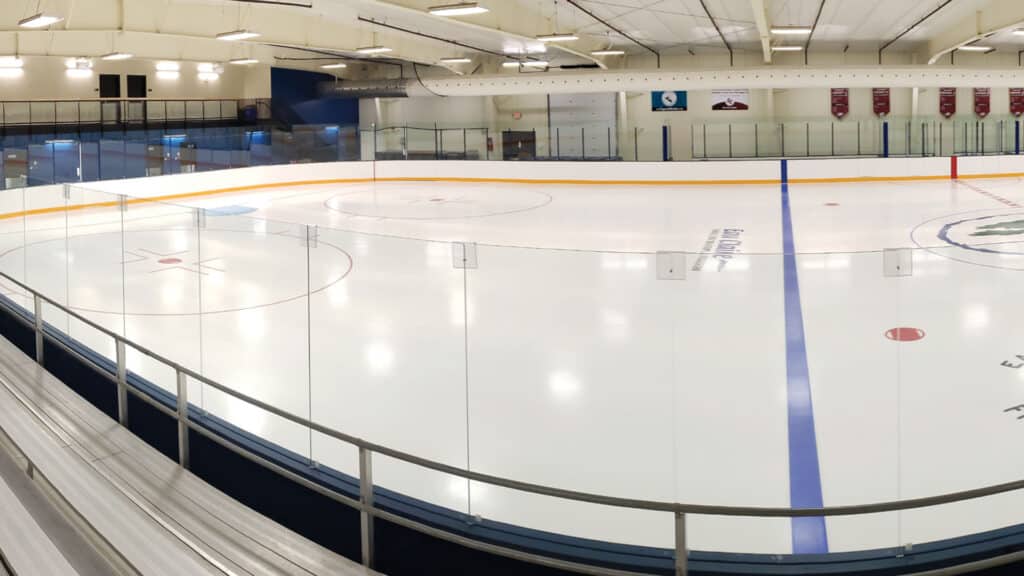 The final phase of the Hobbs Ice Arena

Hobbs Ice Arena
Back to Journal

We conclude our project in pictures series featuring The Akervik Rink remodel project at Hobbs Ice Arena in Eau Claire, Wisconsin with the final piece: rink floor construction. As most readers may recall, this project began in late March of this year. Six months and a lot of work later, the rink was back in operation on schedule, just in time to welcome this year’s skating and hockey groups. Work completed during the project included:

Work was also done to prepare for future projects at the facility, but the crux of this project was centered around the rink floor replacement with the other work being done at the same time to take advantage of the down time while the rink floor was replaced.

First, sub-grade soil was removed and the area was laser graded and compacted to provide a level starting point at the correct height for where the finished rink floor elevation needed to end up. Then, the subfloor heat piping system was installed and covered with a layer of clean sand.

The subfloor system has 3-inch header piping with approximately 1.5 miles of fusion-welded 1-inch SDR-11 piping spaced 18 inches on center for fluid circulation. The subfloor piping was pressure tested for 24 hours at 100psi and once passed, the subfloor piping was covered with a layer of clean sand. That sand layer was then laser graded and compacted so that the insulation layer above it would sit exactly level and be at the correct elevation.

Fusion welding was again used to make all connections throughout the entire cooling piping array. This piping was also pressure tested to 100psi for 24 hours. For reinforcement, rebar is used throughout the pipe chair grid. The rebar also provides a means for tying wire mesh down over the top of the cooling piping. The mesh provides further reinforcement and also keeps the cooling pipes from floating to the surface during the concrete pour. The top of the cooling piping ends up being within a few thousandths of an inch of 1.25 inches below the surface of the finished concrete floor.

This is deep enough for the pipes to be protected, and shallow enough to allow efficient heat transfer from the ice to the cooling fluid moving through the piping system. Once the mesh was installed and completion of all necessary steps was confirmed, the complex process of pouring the rink floor concrete could begin.

A specialized concrete placing crew poured and finished the entire rink floor in one nonstop process that lasted approximately 12 hours. Almost 280 yards of concrete was used to pour the 5-inch thick slab. Laser screeds were used to level the concrete to a tolerance of ¼ inch over the entire slab.

After the floor was poured, it was wet-cured under a vapor barrier for 14 days before the vapor barrier was removed to allow the floor to finish dry curing for another 14 days. Break testing of the new concrete showed a compressive strength of over 7,000psi, well above the specified 5,000psi. After the floor was fully cured, it was slowly cooled down to facilitate dasherboard installation. Once new dasherboards were installed, the space was thoroughly cleaned to be ready for dryfloor events that took place before ice installation. After the dryfloor events, ice was installed on the new rink during the first week of October, and the first skaters took the ice on October 8, exactly as scheduled when the project started more than six months ago.