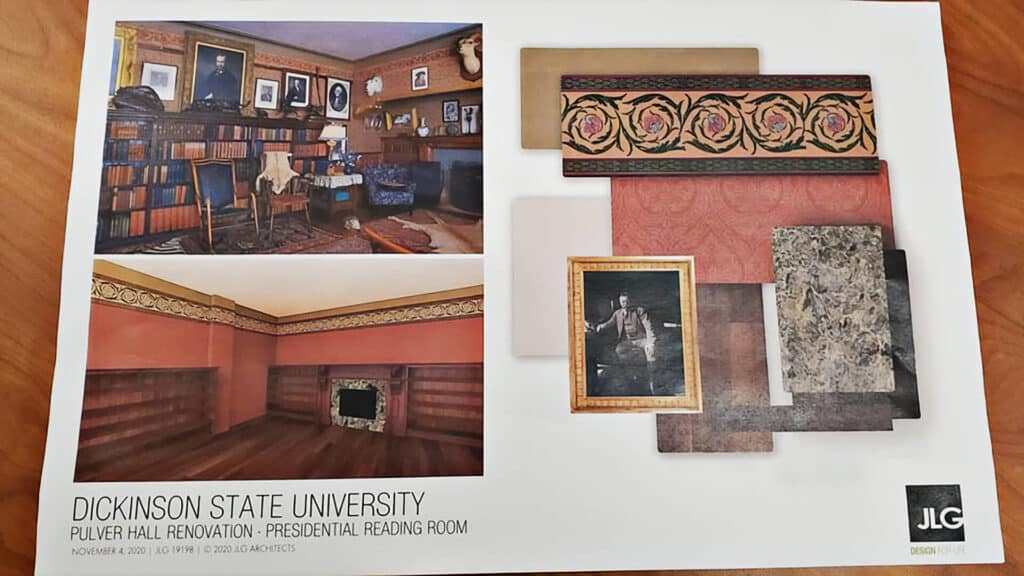 The first floor of the building will be library and museum space, showcasing the work done by the university’s TR Center.

Sharon Kilzer, project manager for the TR Center, and her team have been working on indexing approximately 160,000 Roosevelt-related documents. Essentially, her team makes the digitized archive more searchable.

“We open up that file on our computer, we read it and we describe it and put subject tabs on it to make it findable,” Kilzer said. “With most modern communications, we create them in digital form, so they’re fully text-searchable … The items we have, because they’re historical documents, many of them handwritten … it’s an image. You can’t search the text in it until we pull that text out. That’s the work that we’re doing.”

In addition to the primary source documents, the TR Center has a large number of secondary sources on Roosevelt.

The new space in Pulver Hall gives the center a more prominent place on campus to showcase their work. Currently, the TR Center is housed in the lower level of the campus’s Stoxen Library.

“We don’t necessarily expect a lot of in-person visits, although we do encourage and invite people to come,” Kilzer said. “The biggest benefit is for them to actually experience this place where Roosevelt came in his youth and became the larger than life human being that we know him as. This place was very important to him, and he talked about it throughout his life as being where the romance of his life began.”

Also on the first floor, a room inspired by Theodore Roosevelt’s reading room in New York.

“We think this room … will be in high demand as a small meeting space … That’s our real showpiece of this whole project,” said DSU President Stephen Easton. “One of the reasons for the reading room is that people focus on Theodore Roosevelt as an outdoor person … and that was certainly a big part of him, but he also wrote 40-42 books, and he read like three books a day … We are a university, so one of the reasons we want to feature this space is Theodore Roosevelt was a scholar.”

The second floor will have offices for the Theodore Roosevelt Center. The third floor is DSU office and conference space, with a recording and broadcasting studio. The fourth floor will have more office space as well as a living quarters.

“The apartment is so that we could get visiting guest scholars, people who are here for a semester or a year … There’s another smaller living space that we think of more like a hotel room space for shorter term visitors, like if we had speakers,” Easton said. “I’ve stayed in a space like that in Washington University’s campus in St. Louis. It’s a nice asset for a campus to have.”

The upper two floors will be residence hall space over which Theodore Roosevelt Honors Leadership Program students will have priority.

“This will be our nicest residence hall space on campus. I’m pretty sure it’s all designed to be single rooms. We expect that to be in pretty high demand,” Easton said.

Each floor will be themed after one area of North Dakota that was significant in some way to Theodore Roosevelt.

“The way Pulver Hall is designed, the common space is in the middle of each floor and then the offices or rooms are around the outside,” Easton said. “The idea we came up with was that each floor, in the carpet, will have a place in the Little Missouri River that was significant to Roosevelt in some fashion.”

The six-story building is currently being renovated with $4 million worth of appropriations from the North Dakota Legislature.

“When we were designing the building, our architects told us, ‘You don’t have enough money to get all six floors done, so you’re going to have to choose which floor you’re not going to get done. It was a tough decision, but it was the fourth floor we decided wouldn’t get done,” Easton said. “Then we put it out for bids, and we actually did have enough money … It actually turns out to be a pretty good time to be building out a building project because the contractors want the work, so the bids came out a lot better than we expected them to.”

The appropriations don’t cover the furniture, fixtures or equipment, but DSU hopes to have the entire project completed by June 2021.

Thus far, an asbestos abatement was finished and the building has been gutted.

“We’re really excited about it and the vision and how it’s going to bring the spirit of TR onto our campus,” said Debora Dragseth, Provost and Vice President of Academic Affairs. “I think it’s going to be really a positive thing for us. It’s something that President Easton and I care a lot about.”

Pulver Hall was built as a residence hall during the Vietnam era, and was only used for this purpose for two years. After that, it became the home of the Badlands Human Resource Center, which leased the property for decades.