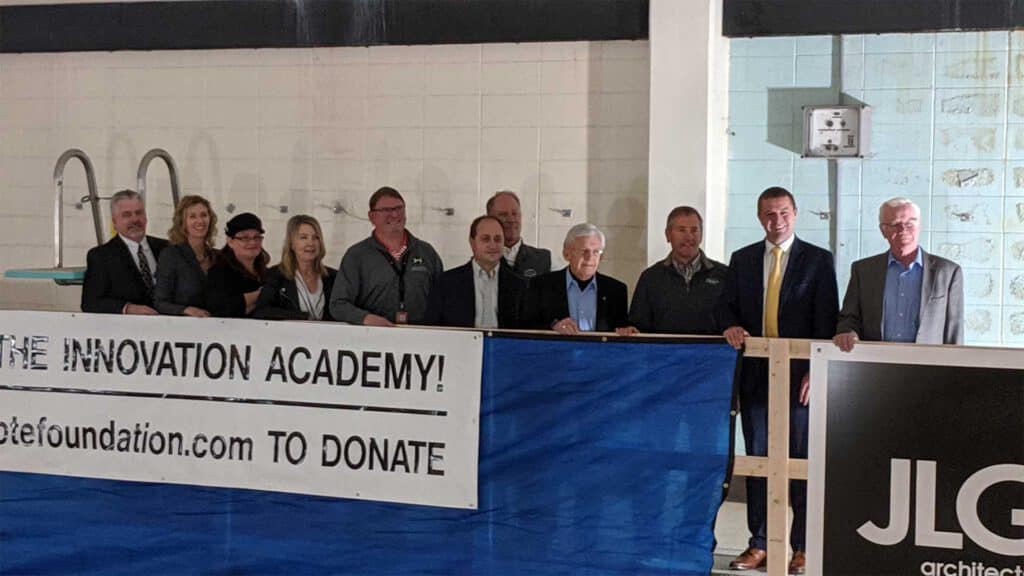 Innovation Academy
Back to Journal

More than five years after it closed, the E.J. Hagan Indoor Pool building still looks much the same inside, but not for long.

If you wait 10 months or so — or if you use an augmented reality smartphone app by construction firm JE Dunn — you’ll be able to see the vision for the future, a school dedicated to personalized learning for students in fifth through eighth grades.

On Tuesday, Oct. 15, board members, employees and students from Williston Public School District No. 1, along with community members, gathered in the building to launch a $12 million renovation project. Community donations brought in about $1.8 million, according to Codi Austreim, the executive director of the Williston Coyote Foundation.

A grant of about $4 million from the Williams County Commission is also going to be used for that, with the district using its building fund to make up the difference.

The new school has two purposes.

First, and perhaps most pressing, it will be able to accomodate 400 students, freeing up space in the adjacent schools of Bakken Elementary and Williton Middle School.

Space has been at a premium for several years, and three attempts to pass bonds to build new schools have failed.

District 1 school board President Joanna Baltes told the crowd that the launch of this project, with its support from the community, will change the narrative about Williston.

“People look at our community and say, ‘You just don’t care about education, about the students,’” she said. “We know that’s not the case.”

It’s also the first purpose-built school dedicated to personalized learning — something that’s been at the heart of the work district superintendent Jeff Thake has done.

Personalized learning give students the chance to learn at their own pace and to focus on their own strengths and interests. The project, one of several the district started after a failed bond vote in April, builds on the work that a group of fifth-grade teachers started last school year.

This year, the Innovation Academy pilot project has fifth and sixth graders, and next year, when its new home opens, it will add seventh grade.

“This creates an option for students who learn best at their own pace,” he said.

Austreim told the crowd that, in honor of the location, she thought of the process as a medley relay. It started with the school board, was continued by the work of the Yes Committee and by the Coyote Foundation, and the donors were the anchor.

“The ones who brought us home and touched the wall is you guys, the donors,” she said.

A major donation was announced at Tuesday’s groundbreaking. American State Bank and Trust Company has given $500,000 to the project, the largest single donation in the bank’s history.

Other corporate donors were honored Tuesday, as well. Equinor organized a free-will lunch in downtown Williston that raised $183,000 in a matter of hours and ONEOK has given $250,000.

“People complain that industry doesn’t step up when it comes to education,” Baltes said. “We know that’s not the case.”