Thinking about the whole child: inclusion, wellness, and safety

As architects who are dedicated to creating the best environments for learning, we understand that safety is one of the most important aspects of a successful school design and operation. In fact, parents and educators typically cite safety as their number one concern.

We work to create a more secure and safer environment by being deliberate to achieve better sight lines that allow for more eyes on specific areas, and particularly entries with the greatest concerns. As safety in our schools continues to evolve, a greater understanding of what makes staff and students feel safe becomes more apparent. We continue to seek out improvements to design and operation of schools with the concept of achieving total child wellness — feeling safe anywhere inside the school. This has led us to re-visit the design of toilet rooms and locker rooms.

When talking to school administrators about where they see the most behavioral problems occurring, they inevitably bring up toilet rooms and locker/shower rooms.

Administrators and students will note that negative activities such as bullying, gambling, fighting, predatory digital images, vaping, and graffiti, often occur in these areas.
Due to the private nature of the spaces, administrators cannot have “eyes” on the students which often leads to an increase in negative behaviors. Students also expressed concern regarding the lack of privacy and adult supervision which can make them feel unsafe in two spaces they have no choice but to use.

To address these issues, a new idea needed to be conceptualized. Universal Toilet Rooms and Universal Locker Rooms are emerging as a critical design conversation for schools who are looking to address safety, privacy, and the social emotional concerns of students. Universal Locker or Toilet Rooms provide a space that can be used by anyone. Occupying the same amount of space as two separate sex toilet rooms, Universal Toilet Rooms typically consist of individual single toilet compartments, acoustically separated walls between toilet compartments, and a common handwashing area. The compartments have full height doors with locks that indicate — on both sides of the door — whether the stall is occupied. Unlike traditional toilet partitions that start several inches above the floor, the doors to the universal toilet compartments are cut close to the floor so a phone with a camera cannot be slid underneath.

Outside the toilet compartments, the common handwashing area is in a visible and public area, ideally at a high traffic corner where two corridors meet to allow for increased monitoring of the space. Since the handwashing area is not part of an enclosed toilet room, this public area can be easily monitored by staff and cameras, reducing the number of negative incidents and safety concerns for students. One or more toilet compartments are provided with an interior sink which is designed to be completely accessible. In addition, the total number of required toilets and lavatory fixtures are provided without urinal substitution.

How do students feel about Universal Toilet Rooms? In a survey at Johnson High School, 43% of students preferred the inclusive model to the traditional model, and an additional 40% did not have an opinion either way. When asked about safety, 89% of students said the Universal Toilet Rooms made them feel either neutral, somewhat safe, or very safe — with very safe receiving 30% of the responses. Having access to a restroom, regardless of sex, was also cited by students as a positive to the inclusive layout because they saw a decrease in their wait time.

The number of negative incidents in toilet areas was reduced from several a day to only a few a year.

At Jackson County Central Schools in southern Minnesota, Universal Toilets are being incorporated into the new Middle School. Principal Chris Naumann has been an advocate for their implementation throughout the design process, saying “The Universal Toilets are more inclusive for everyone. Middle School is difficult already with all the social pressures and this helps relieve some of that pressure for students. I have received emails from students that has shown me that what we are doing is right.”

The Minnesota Department of Education (MDE) has discovered that when universal toilet rooms are provided, they can more easily enhance safety and public security for building occupants. This includes high visibility from the adjacent corridors into the washing space, coupled with a high level of privacy to individual toilet enclosures. The MDE found that student and staff use was higher, supervision was improved, illicit activity was significantly curbed, and the user’s sense of privacy and safety was enhanced.

With documented success for Universal Toilet Rooms, the question begs to be asked: Why not extend this concept? Could we pinpoint other areas where a high degree of negative activity typically occurs? Or could this concept be applied to locker rooms, and any area on school grounds where students feel unsafe and desire a need for privacy? The answer is yes. Many of the concepts are identical when applied to Universal Locker Rooms: create a highly visible, public area where the lockers are located, provide private, fully-enclosed changing rooms, and provide adjacent Universal Toilet Rooms and Shower Rooms.

A good design starts by arranging the lockers for optimum visibility, then opens the public portions of adjacent staff and coach’s rooms to the locker area. As a result, coaches and staff have increased supervision of the space, and students have a higher sense of security and privacy. If you have ever used a family locker room at your local health club, you have probably seen these ideas at work. 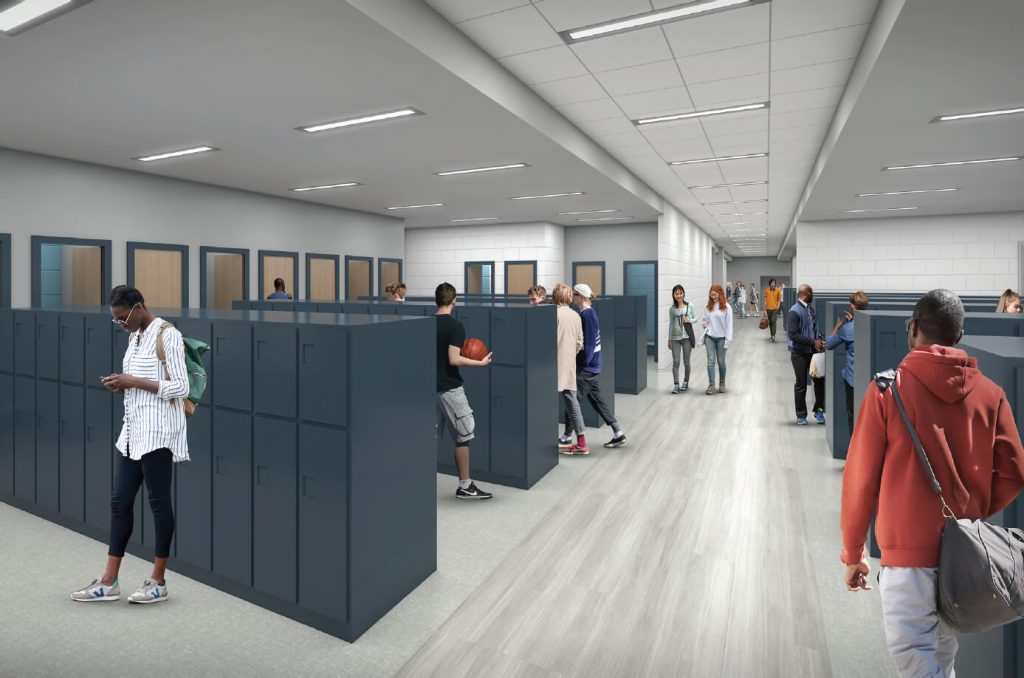 Beyond these general concepts, each school will need to ask themselves questions specific to their district regarding Universal Locker Rooms.

How many changing rooms are needed to allow students to change for practice, games, or physical education classes? This number will vary by school, but typically it should be enough to keep the changing time to around five minutes.

How many showers are needed? Students do not always shower after class or practice, but having access to a few showers is a good idea. Each school will want to identify the need for showers and plan accordingly.

How many locker rooms are needed? When visiting teams come to your facility, it is common practice to give them a locker room to use, separate from your varsity locker room. So minimally, you would likely want to have two spaces, or a space that could be divided up into two locker rooms. However, depending on the school and how it is used, there may be more than one event going on at a time, and the ideal number of locker rooms might be four or more. A smart option for some facilities is to design the locker rooms as one space that can be sub-divided for after-school activities. If you are creating separate locker room areas, plan accordingly with locations for your changing room, toilet, and shower areas. 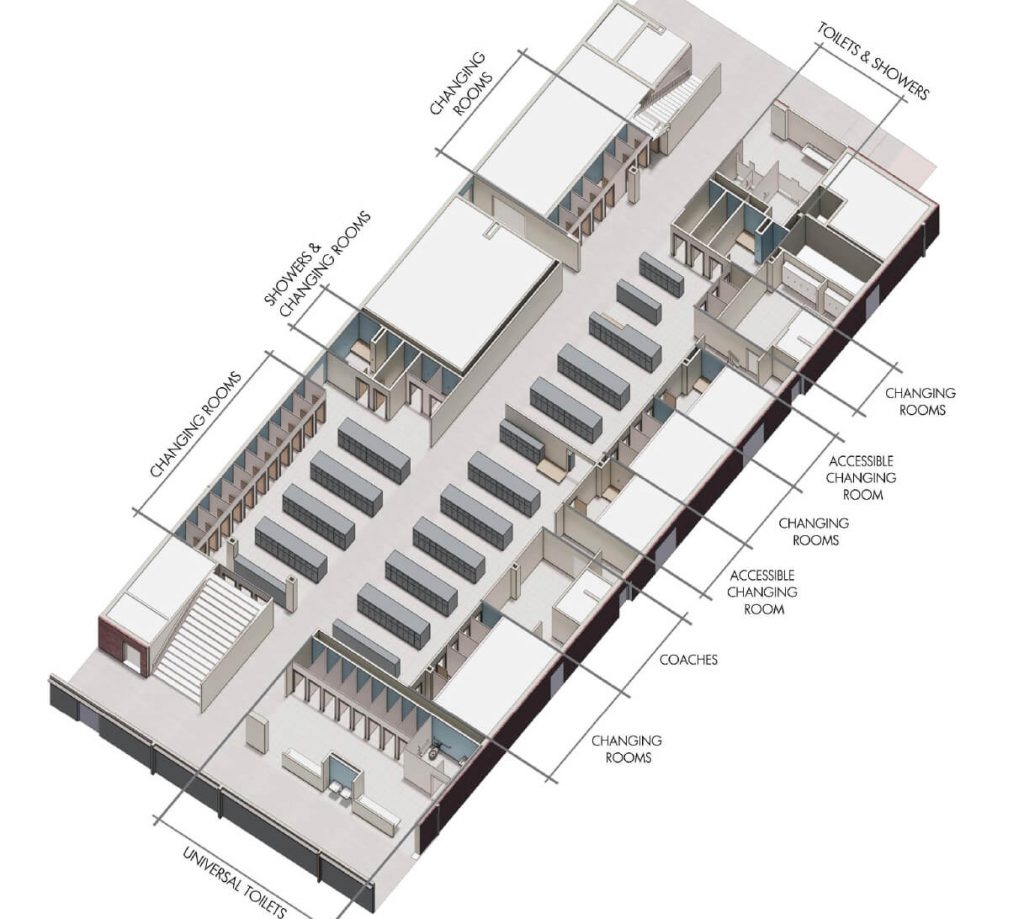 While not yet widely implemented, it appears from early discussions with school administrators that this concept is worth advancing. With a reduction of negative activities and increase in student privacy and safety, it’s a desirable option for any school. Just like with the other concepts being used in school design, when both Universal Toilet Rooms and Universal Locker Rooms are implemented, staff and students experience more privacy and feel safer, compared to the traditional model. When students and staff feel safe, we know that learning improves. When learning improves and negative behaviors are diminished, parents can once again feel confident in the institution that is designed to inspire and protect their children.