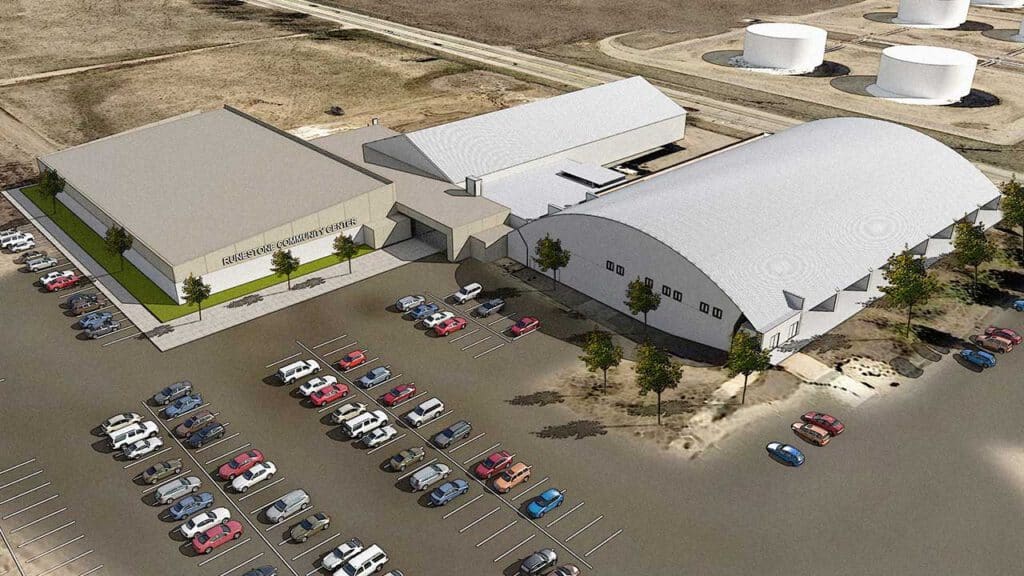 Proposed expansion of the Runestone Community Center
Back to Journal

Alexandria leaders presented their case to key state legislators Thursday for getting a $4.4 million bond to help pay for an $8.8 million expansion of the Runestone Community Center.

Members from the Senate’s Capital Investment Committee, including its vice chairman, Sen. Bill Ingebrigtsen, R-Alexandria, toured the center, learned about its history, asked questions and found out why the project is needed.

City Administrator Marty Schultz told them a third sheet of ice would help meet the “explosive growth” in ice and dry floor activities in the past 10 to 15 years, allowing more hockey tournaments, figure skating competitions, curling events and dry floor uses such as trade shows, concerts, graduations and home shows.

“These five organizations see significant potential for growth with the facility’s expansion,” Schultz said. “They have maximized the programming they can offer in the current facility.”

When a senator asked about the project’s economic impact, Schultz said that a family that travels to Alexandria for a hockey tournament spends an estimated $750 over the course of a weekend. With more tournaments and other events, Schultz said the expansion’s total impact could reach $7 million a year.

The senators also asked how the city would come up with the rest of the money if the $4.4 million bond is approved. Schultz said that private funds, raised by groups that use the facility, would cover about half of the remaining amount and the city would provide between $2 million and $2.5 million, most likely through tax abatement bonds.

After the presentation and tour, Ingebrigtsen said he was impressed that the city planned for the future by making energy upgrades in the center, such as a new ammonia-based compressor system that chills the ice, and readying the facility for an expansion.

“I like the project,” Ingebrigtsen said. “I think it would bring a lot of revenue to town and expand on all the excitement that’s going on at the RCC.”

Ingebrigtsen declined to say what the chances are that Alexandria would receive a bond. “It’s hard to say,” he said, adding that some communities apply for a bond many times before they receive one.

Sen. Torrey Westrom, R-Elbow Lake, who isn’t on the committee but participated in the tour because it’s so close to his district, was also enthused about the project.

“I think it’s great to show the community, regional aspect of it,” he said. “This would draw people from 30, 40 and 50 miles out and would benefit hotels, restaurants and shopping in western Minnesota.”

Westrom also declined to say what the odds are that the bond will be approved. He said that Alexandria boosted its chances by having the committee tour the facility and learn more details about the need for the expansion.

The proposed $8.8 million expansion at the Runestone Community Center would add a third rink area on the southwest side of the facility that could be used for ice and dry floor events. Retractable seating could be used to maximize the space. Other features include an expanded lobby, locker and changing rooms, restrooms, office and a Zamboni room. Construction could take place as soon as 2018.