Bismarck State College lineworker student Brian Clark descends one of the five 35-foot-tall utility poles inside the new 26,337-square-foot Lineworker Training Center in Mandan on Friday. The indoor training area is 18,000 square feet in size.
Back to Journal

A new Lineworker Training Center on the North Dakota Association of Rural Electric Cooperatives campus in Mandan aims to boost training for Bismarck State College’s lineworker program and for the electric co-op workforce in the state.

Officials on Friday unveiled the $6.2 million, 26,337-square-foot facility that has been in the works more than a year.

“The new Lineworker Training Center stands as a testament of the electric cooperative commitment to our current and future workforce, to meeting the needs of our industry and, above all, powering the lives of our members and the communities we serve,” association General Manager and Executive Vice President Josh Kramer said in a statement.

The facility has an 18,000-square-foot indoor training arena with 50-foot walls and 44-foot ceiling clearance, providing adequate space to train workers on the construction and maintenance of overhead and underground electrical infrastructure. It also includes two classrooms and a simulator room for Commercial Driver’s License training.

The former facility consisting of a classroom and shop had been around since 1970, and did not have space for indoor utility pole training. Students also had to commute to BSC’s campus in Bismarck to use truck-driving simulators.

The new facility was funded by a $4.1 million grant from the U.S. Commerce Department’s Economic Development Administration, $1.1 million from North Dakota’s electric co-ops, and $1 million in donations.

The association owns the facility and will lease it to BSC, continuing a partnership that has been in place for more than 50 years and has trained more than 1,700 apprentice lineworkers. The association also sometimes brings lineworkers from co-ops across the state to Mandan for training.

It’s the only program of its kind in the state. An estimated 80% of the lineworkers employed by North Dakota’s co-ops go through the 10-month program.

“North Dakota’s electric cooperatives have doubled down on their commitment to improving the quality of life of the people they serve by reinvesting in this critical workforce,” Kramer said.

BSC leased the previous facility for about $60,000 per year.

“One of our goals was to avoid an increase in BSC’s cost to deliver the lineworker program,” Kramer told the Tribune. “Even with an improved $6.1 million training facility, the cost to BSC will remain close to the same.”

The new facility is “a great investment in the future workforce that is vital to North Dakota and our economy,” BSC National Energy Center of Excellence Dean Bruce Emmil said in a statement to the Tribune.

“Lineworkers will continue to work in difficult weather conditions but from a training perspective, having the ability to continue instruction indoors will increase student effectiveness by providing them more time on the equipment and more opportunities to practice and master their skill sets,” he said.

The project also included a renovated headquarters for the association, which is a trade group for 16 electric distribution co-ops and five generation and transmission co-ops operating in North Dakota. A major component of the upgrade is a Cooperative Center that offers education, training and meeting spaces with improved technology. Two electric vehicle charging stations also have been installed for future use.

“These investments show that, as cooperatives, we are focused on the future and ready to meet the challenges ahead for our industry,” Kramer said. 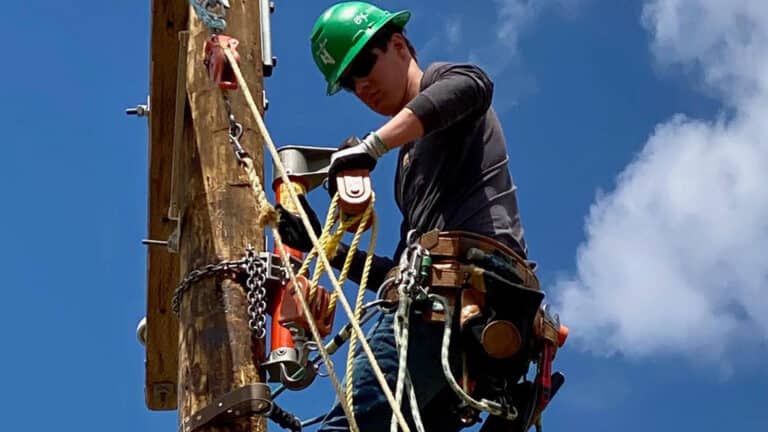